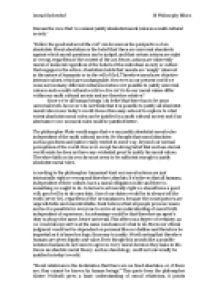 Discuss the view that we cannot justify absolutist moral rules in a multi cultural society.

﻿Jonna Klockenhof IB Philosophy Ethics Discuss the view that ?we cannot justify absolutist moral rules in a multi cultural society.? ?Follow the good and avoid the evil? can be seen as the perspective of an absolutist: Moral absolutism is the belief that there are universal standards against which moral questions can be judged, and that certain actions are right or wrong, regardless of the context of the act. Hence, actions are inherently moral or immoral regardless of the beliefs of the individual, society or culture that engages in the action. Absolutism holds that morals are ?simply? inherent in the nature of humanity or in the will of God. Therefore morals are objective intrinsic values, which are unchangeable. However in our present world we come across many different cultural societies. Is it possible to justify universal rules in such a multi cultural world we live in? Or do our moral values differ within our multi cultural society and are therefore relative? Since we?re all human beings I do belief that there has to be some universal truth, however I do not think that it is possible to justify all absolutist moral rules in our today?s world. ...read more.

Understanding the principles of moral relativism some advantages appear quite obvious: Firstly using moral relativism, one can arrive quickly, easily and especially painless to an ethical standpoint on a moral issue. To decide what is right and what is wrong one only has to look on one?s own culture, its habits and moral principles. And one do not has to be afraid that one might be attacked because of the decision made. This comfort is given by moral relativism because it forbids to criticise ethical principles of a culture from the outside. For example within an atheistic society a woman is allowed to have an abortion. A Roman Catholic would never allow that. Nevertheless this woman does not have to care about him because he is not allowed to criticise her from the outside. Moreover this theory derived from the principle of tolerance. This point sounds reasonable. Everyone should be free to make his own decisions as long as his culture accepts them and they should not be questioned from the outside. The point perhaps most worthily is that moral relativism is very flexible. It takes into account all circumstances of a situation such as history, culture, society, motives and even relationships. This strength becomes even stronger using the example of euthanasia. ...read more.

100? 1000? Moral relativism gives us no answer. Moreover it focuses only on the society and not on the minority or individual. But are not our moral principles that everyone should be able to make ones own, free decisions? Moral relativism claims that those decisions should be based on the moral principles of your culture and not on ones own opinion, which again is in disagreement with our intuition. Although the idea of making our moral decisions dependent on circumstances may firstly appear convenient, after having explored different views and its weaknesses I think it will not work out. In my opinion, there are many crucial weaknesses which can hardly be disproved. Although it sounds reasonable following the principle of tolerance or that our decisions are more flexible using Moral Relativism I would say there are always disadvantages, which can undermine those strengths. If you should tolerate actions of which your intuition tells you they are intrinsically wrong, will you nevertheless accept them? I do not think so. Intuition is more powerful than stranger authorities such as moral theories. Therefore I do think that some absolutist moral rules can be justified to a certain extent. However, as shown, moral values can never be totally independent on circumstances. I conclude, that one could use moral relativism with restrictions (acceptance of intrinsic universal values) and more developed ideas in a multi cultural world. ...read more.