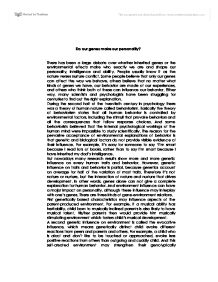 Do our genes make our personality? There has been a large debate over whether inherited genes or the environmental effects make who exactly we are and shape our personality, intelligence and ability.

Do our genes make our personality? There has been a large debate over whether inherited genes or the environmental effects make who exactly we are and shape our personality, intelligence and ability. People usually know it as the nature verses nurture conflict. Some people believe that only our genes can affect the way we behave, others believe that no matter what kinds of genes we have, our behavior are made of our experiences, and others who think both of these can influence our behavior. Either way, many scientists and psychologists have been struggling for centuries to find out the right explanation. During the second half of the twentieth century in psychology there was a theory of human nature called behaviorism. ...read more.

But nowadays many research results show more and more genetic influence on every human traits and behavior. However, genetic influence on traits and behavior is partial, because genetics account on average for half of the variation of most traits. Therefore it's not nature or nurture, but the interaction of nature and nurture that drives development. In other words, genes alone can not give a complete explanation for human behavior. And environment influence can have a major impact on personality, although these influence may interplay with one's genes. There are three kinds of gene-environment relations. First genetically based characteristics may influence aspects of the parent-produced environment. For example, if a musical ability has heritability, child born to musically inclined parents is also likely to have musical talent. ...read more.

And this self-created environment may strengthen their genotypically influenced tendency to withdraw from social contact. A third one is called active correlation, meaning we are not simply passive responders to whatever environment happens to come our way. We actively seek out certain environments and avoid others. For instance, smart child will seek out intellectually stimulating environment. And become even smarter. In conclusion, it is safe to say that the role of genetics and the environment equalize people's traits and behavior. Because genetic influences interact with experience to make a complete human. So we can't say only our genes make us the way we are. In other words genetic and environmental factors rarely operate alone; they interact with one another in important ways. Genetic factors may influence how different people experience the same environment, and the environment can influence how genes express themselves. ?? ?? ?? ?? ...read more.