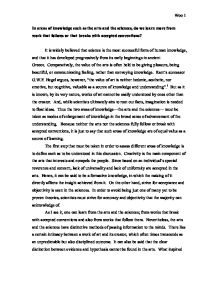 Do we learn more from the arts or the sciences?

In areas of knowledge such as the arts and the sciences, do we learn more from work that follows or that breaks with accepted conventions? It is widely believed that science is the most successful form of human knowledge, and that it has developed progressively from its early beginnings in ancient Greece. Comparatively, the value of the arts is often held to be giving pleasure, being beautiful, or communicating feeling, rather than conveying knowledge. Kant's successor G.W.F. Hegel argues, however, "the value of art is neither hedonic, aesthetic, nor emotive, but cognitive, valuable as a source of knowledge and understanding".1 But as it is known, by its very nature, works of art cannot be easily understood by ones other than the creator. And, while scientists ultimately aim to root out facts, imagination is needed to float ideas. Thus the two areas of knowledge-the arts and the sciences- must be taken as modes of enlargement of knowledge in the broad sense of advancement of the understanding. Because neither the arts nor the sciences fully follow or break with accepted conventions, it is just to say that such areas of knowledge are of equal value as a source of learning. ...read more.

At a glance, his works seem effortless. Mondrian justified his simplistic style by saying, "...perpendicular and flat lines can be seen everywhere in nature; by using a diagonal line I would be canceling that out. But I'm inclined to say that this cannot be combined with perpendicular and flat lines or with different kinds of slanting lines."2 As is seen with Mondrian's works, artistic insights cannot be paraphrased; whatever Mondrian has to tell, the others can only be told as Mondrian told it. If a paraphrase was to be substituted, that would result in destroying of the artwork itself since the arts is consisted of self-determining acts. Consequently, in the arts, we learn through the process of understanding that a mind goes through in an effort to speculate the contained messages that artists intended to convey. The sciences direct the mind through a progress of thought in a similar way. Admittedly, much more is required than a hypothesis and an experiment in this area of knowledge. An idea must be confirmed over and over and finally arrive at an accurate and universal state to be accepted in the sciences. But prior to anything, scientists use their imagination to float ideas as an artist would before further steps are taken to yield the facts. ...read more.

Learning does not necessarily mean learning from a school textbook, or memorizing scientific formulas. Established scientific theories are undeniably phenomenal in a sense that each one of them took decades or even centuries to progress from an idea to a universal truth that is widely accepted all throughout. Still, the arts and the sciences both have something very valuable to teach us. The formative process of creating a work of art can influence one's own being. Knowledge is also gained by anyone other than the creator who takes the mind through the process of finding the end or the purpose of an artwork. In the sciences, the mind is directed by first making imaginative conjectures, then constructing proofs and assembling evidence. Once an idea is established as 'truth' after it is acknowledged by the majority, then the knowledge can be shared by all. After all, whether an area of knowledge follows or breaks with accepted conventions is not significant in assessing how good of a learning medium it is. In any area of knowledge, we will learn as much as we desire to as long as we put our minds to work. 1261 words ENDNOTES 1 Gordon Graham, An Introduction to Aesthetics (Routledge, 2000) 48. 2 Carel Blotkamp, Mondrian: The Art of Destruction (Reaktion Books, 2001) 120. Woo 1 ...read more.