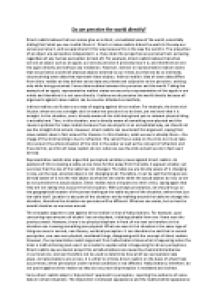 Do we perceive the world directly?

﻿Do we perceive the world directly? Direct realists believe that our senses give us a direct, unmediated view of the world, essentially stating that ?what you see is what there is?. Direct or naive realism states the world is the way our senses perceive it, and we apprehend it this way because this is the way the world is. The properties of an object are perception-independent i.e. they retain the properties we perceive them as having, regardless of any human perception (or lack of). For example, direct realists believe that when we see an object such as an apple, our senses perceive it precisely how it is, and therefore we see the apple directly and without any mediation. However, indirect or representative realism claims that we perceive a world of physical objects external to our minds, but that we do so indirectly, via perceiving sense data that represent these objects. Indirect realist?s idea of sense data differs from direct realists as they believe sense data are private and subjective to the perceiver, existing only while being perceived. ...read more.

An example of this is viewing a table; as we move further away from the table, it appears smaller, yet we know that the size of the table has not changed. The table we are directly aware of is changing in size, yet the real, external object is not changing at all. Therefore, it can be said the thing we are directly aware of is not the real object as what we see varies while the actual objects do not, so we do not perceive the actual objects. Direct realists have a response to their critics, saying again that they are not taking into account the full situation. With perceptual variation, we should focus on the geographical location of the person looking at the table as part of the situation, rather than just the table itself. Location is also part of the situation and by walking around the table we change the situation, therefore the situation we perceive will be different. ...read more.