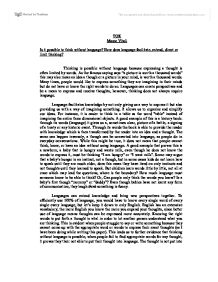 TOK Marco Vitali Is it possible to think without language? How does language facilitate, extend, direct or limit thinking? Thinking is possible without language because expressing a thought is often limited by words. As the famous saying says "a picture is worth a thousand words" this may also mean an idea a though or a picture in your mind, is worth a thousand words. Many times, people would like to express something they are imagining in their minds but do not have or know the right words to do so. Languages can create perspectives and be a mean to express and receive thoughts; however, thinking does not always require language. Language facilitates knowledge by not only giving us a way to express it but also providing us with a way of imagining something. It allows us to organize and simplify our ideas. For instance, it is easier to think in a table as the word "table" instead of imagining the entire three dimensional objects. ...read more.

But children learn words little by little, not all at once which may lead the questions, where is the boundary? How much language must someone know to be able to think? Or, Can people only think the words you know? Is a baby's first though "mommy" or "daddy"? Even though babies have not learnt any form of communication, they laugh think something is funny. Languages can extend knowledge and bring new perspectives together. To efficiently use 100% of language, you would have to know every single word of every single every language, but let's keep it down to only English. English has an extensive vocabulary; the more English you know the more you expand your thoughts, since better use of language means thoughts can be expressed more accurately. Knowing the right words to put forth a thought is vital in order to let another person understand what you are thinking. This is evident when people struggle to say or write something because they cannot come up with the appropriate word or words to express their exact thoughts (as I have been doing while writing this paper). ...read more.

a ball, you think "ball", when you see the sky, you think "air", "blue", "sun" and so on, all in the form of words. Language only restricts a thought to one way of thinking and limits it from expressing the thought to the full extent. While there is no limitation placed on thinking by language, because thinking does not necessarily require language. Thinking does not always require language; people are capable of thinking without language. When most people think rationally, they require language. When people think or even talk within themselves they do it through language. But when people think visually they do not need language to give them information about the visual world. For example; someone can look at a person's face and know what they are feeling. Language is a mean of receiving or expressing though, it is not the though itself, thus if you do not have to receive or express a though, you do not need language, which leads to the conclusion that it is possible to think without language. ...read more.