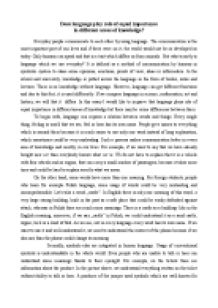 Does language play a role of equal importance in different areas of knowledge?

﻿Does language play role of equal importance in different areas of knowledge? Everyday people communicate to each other by using language. The communication is the most important part of our lives and if there were no it, the world would not be as developed as today. Only humans can speak and that is a trait which differs us from animals. But what exactly is language which we use everyday? It is defined as a method of communication by humans in symbolic system to share some opinions, emotions, points of view, ideas or information. In the school and university, knowledge is putted across the language in the form of books, notes and lectures. There is no knowledge without language. However, language can get different functions and due to this fact, it is used differently. If we compare language in science, mathematics, art and history, we will that it differs. In this essay I would like to improve that language plays role of equal importance in different areas of knowledge but there may be some differences between them. To begin with, language can express a relation between words and things. ...read more.

On the other hand, sometimes producers change a little the size of the product. Futhermore, in some countries, mostly in the USA there are a lot of people with overweight and producers make bigger size of the clothes even if on the ticket it is still the same. It is not a good resolution because when we want to buy a gift for someone living in other country, we do not know if the size is good and it fits to our friend. Producers should follow the criteria and produce clothes puruant to previously established roles. As I said about the symbols in the real life, I would like to mention about mathematical language. Scienciests use their own language to communicate to each other but it is not used in everyday life. Mathematics makes use of language with numbers and symbols taken from different alphabets. All scienciests understand their signs and thanks to them they can easily communicate. For example, let's take the equation: . It seems to be diffucult but when we use specific for maths transformation, we will see that it is not as difficult as we thought. All we have to do is change the power into positive and transform the integer into rational number. ...read more.

These things could have a lot of meanings which means that language of art is very individual. An artist who has made, composed or painted a work of art could have problably another view than we have. But in art every is possible and is not forbidden. As a disagreement I would like to say that sometimes inconspicuous symbol could be very abusive. It usually bases on religion. Adherents see some signs in their black colors, they see relation with their religion and these relations are mostly bad. An arist usually did not want show it in a bad light and has not seen such an interpreation of its work. Reading into works of art could bring on wars and political conflicts which could be dangerous for population. To conclude, after compersion of historic, art, mathematic language and examples taken from life, we can observe that language plays role of equal importance in every area of knowledge. Thanks to language which is different for every area of knowlege and different in our every-day lfe we can communicate to each other using special language depending on the subject. In mathematics our language is backbone for equations and theorems so unless there were language in maths than there would be only symbols and numbers. ...read more.