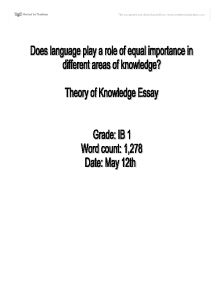 Does language play a role of equal importance in different areas of knowledge?

Language is important for every area of knowledge. Language has always played a central role in the medium of communication hence; it is widely used by all. The diversity of languages shows the value and how much of an important aspect of our lives it is today. It acts as a medium in which people can converse and express their emotion and experiences. Language is not only spoken verbally but it can also be expressed in numerals and in written form. Although, language is important for every area of knowledge, I believe language does not plays a role of equal importance in different areas of knowledge. Apart from languages, reason, emotion and perception are also used in understanding the different areas of knowledge. The two areas of knowledge that I will be focusing on are mathematics and arts. Mathematics deals with symbols, numbers and variables; these form the fundamental aspect of most theories. Mathematics replies on language in the form of symbols, numbers, variables and human languages. Without theses mathematics has no definite function or purpose and it is inadequate. Mathematics depends on the English language to communicate mathematical logic and properties. The origin of mathematics began with the number system, simple calculations and combinations. ...read more.

" 3This shows that thought is driven by language and hence, language limits the extent to which a 'linguistic community' can think about certain aspects.4 It is not possible to adjust to the realistic world without using language. Language is the only way to solve problems of communication and hence, our thoughts derived from different areas of knowledge that results in the languages we know, thus I believe that, language shapes the thought process. This concludes that language is important for every area of knowledge, since without thought no area of knowledge is complete and I believe it the knower's linguistic capabilities that limit the extent to their thoughts on various aspects. Art had a wide subdivision of cultures that compress of visual arts, performing arts, language arts, culinary arts and physical arts. The arts are considered to be a form of human emotion and expression and Language plays a different role in every subdivision of arts hence; its importance in each of them varies. There is a contrast between performing arts and drawing, while performing arts uses language to its fullest, drawing doesn't seem to require language. In performing arts scripts, dialogues and almost everything requires language. ...read more.