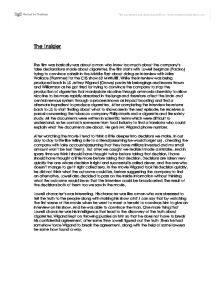 Does language play roles of equal importance in different area of knowledge?

The Insider The film was basically was about a man who knew too much about the company's false declarations made about cigarettes. The film starts with Lowell Bergman (Pacino) trying to convince a sheik in the Middle East about doing an interview with Mike Wallace (Plummer) for the CBS show 60 Minute .While the interview was being produced back in US Jeffrey Wigand (Crowe) packs his belongings and leaves Brown and Williamson as he got fired for trying to convince the company to stop the production of cigarettes that manipulate nicotine through ammonia chemistry to allow nicotine to be more rapidly absorbed in the lungs and therefore affect the brain and central nervous system through a process known as impact boosting and find a alternate ingredient to produce cigarettes. ...read more.

And in spare time we think I should have thought twice before taking that decision, I have should have thought a little more before taking that decision. Decisions are taken very quickly the one whose decision is right and successful is called clever, and the one who doesn't mange to get it right called zero. In the movie Wigand took his decision quickly, he did not think what the outcome could be, before suggesting the company to find an alternative. Lowell also decided to pass on the inside information without thinking what the outcome would be so that the interview could be broadcasted. The result of the decisions both of them too we saw in the movie. Lowell character's was interesting. His character was like a man who was obsessed to tell the truth to the people along with making his show a hit. ...read more.

All of this he went alone but still never gave up. That's what his character was all about. The movie also shows glimpses of the corporate world where money makes all the work done or gets it all destroyed. It was all about money when the tobacco companies had to make false declarations, when the interview was edited. At last I would say that the movie was really good. It showed a people change when circumstances change, how money plays an important role, how people make wrong decisions when crises on them rise, how an intelligent and a dedicated person to job and his company can turn against his own company if he is cheated. All of this was shown in the movie. The thing I have learnt from this movie is that never change your decision if you think you are right, thinking about the outcome. ...read more.