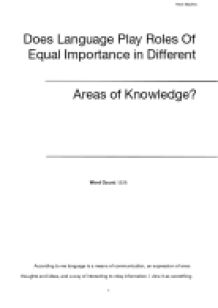 Does Language Play Roles Of Equal Importance in Different Areas of Knowledge?

﻿Heer Majithia Does Language Play Roles Of Equal Importance in Different Areas of Knowledge? Word Count: 1226 According to me language is a means of communication, an expression of ones thoughts and ideas, and a way of interacting to relay information. I view it as something that constantly evolves, transforms and takes the shape we give, however, at the same time language changes and influences our thoughts and actions. I believe that language is equally important in all areas of knowledge and that we cannot communicate without it. Nevertheless, language alone as a way of knowing is not completely reliable as the quality of language and the choice of words used can convey different ideas. For example, consider the difference between ambition and greed, ambition is an immense desire to obtain something and greed is an immense and selfish desire for something, essentially both of them are two sides of the same coin but they evoke different thoughts in people?s minds. Furthermore, language has its own limitations as it cannot communicate ideas such as irony and sarcasm; and for language to be an effective way of knowing all the individuals involved need to be aware of the language that is being used. ...read more.

Hence, in my opinion since arts are forms of expression without language we cannot communicate our thoughts in this area of knowledge. Consequently, language plays a vital role in the sciences as well. This can be explained using the example of the geologist Alexandre-Emile Béguyer de Chancourtois. He was the first person to notice the periodicity of elements and devised a functional and unique way of organising them, but his work was not accepted by the scientific community as he used mainly geological terms (Helmenstine). Though he observed that elements with similar properties occurred at regular atomic weight intervals, his ideas were not considered as they were presented in a different language. In Chemistry, a natural science there is a set of notations that are widely accepted and understood by chemists all over the world. Thus, in conclusion, I firmly believe that language is an integral part for the understanding and communication of the Natural Sciences and I believe that without language scientific discoveries can neither be shared with others nor can be accepted in the world. Moreover, in the area of knowledge, History, people have tried to understand the past by attempting to unravel the languages used in earlier times. ...read more.

I have observed this on various occasions, on one of these instances a government worker, whose mother tongue is Marathi and has been born and brought up in Maharashtra, acknowledged and addressed my problem only when I started talking in his own language. A possible explanation can be given by the idea that when someone approaches an individual and talk to them in their mother tongue they feel closer to the person and are more likely to help them, connect with them and agree with their ideas. This thought is mirrored in Nelson Mandela?s words, ?If you talk to a man in a language he understands, that goes to his head. If you talk to him in his own language, that goes to his heart.? (Mandela) which illustrates and reiterates that regardless of the area of knowledge, different languages are indispensable and equally important. Using the above analysis as my basis, I can conclude that life cannot persist without language as it plays a fundamental role in the imparting of knowledge, collating of information and understanding of another person?s ideas. We can also assume that language is an innate characteristics as even new born infants express their wants to their parents by crying. This way of knowledge is used throughout our lives and no area of knowledge can be understood clearly without it. ...read more.