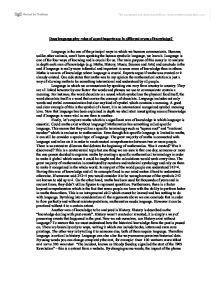 Does language play roles of equal importance in different areas of knowledge? Language is the one of the principal ways in which we humans communicate. Humans, unlike other animals, aren't born speaking the human symbolic language, we learn it. Language is one of the four ways of knowing and is crucial for us. The main purpose of this essay is: to analyze in depth each area of knowledge (e.g. Maths, History, Music, Science and Arts) and conclude in the end if language is really more infuential and important in some areas of knowledge than in others. Maths is an area of knowledge where language is crucial. Experts argue if maths was created or it already existed. One side states that maths was In my opinion the mathematical notation is just a way of allowing maths to be something international and understood by all people. Language in which we communicate by speaking can vary from country to country. They are all linked however by one factor: the words and phrases we use to communicate contain a meaning. For instance, the word chocolate is a sound which symbolizes the physical food itself, the word chocolate itself is a word that carries the concept of chocolate. Language includes not only words and verbal communication but also any kind of symbol which contains a meaning. ...read more.

By taking into consideration all the arguments above we can conclude that in order to flow perfectly and without misinterpretations, mathematics needs language. However it can be practiced without it to a certain extent. Another area of knowledge to be analyzed is History. History is described as the "knowledge dealing with past events". History wasn't created or invented; it is simply a way of preserving events that happened in the past. Now we ask ourselves, can History exist without language? To answer this we must understand how the historical knowledge from the past is passed on. There are basically only to ways, writing it which can include books, letters and even cave paintings. The other way is by telling it to someone else, both of them require language. Therefore language is critical in history. Language can also alter the way someone perceives historical data. By using words you can change completely the text, for example: Over 100 workers were killed and some 300 wounded. "The incident, known as Bloody Sunday, signalled the start of the 1905 Revolution" - this is a extract from a website. By changing some words, the impact of the phrase can change drastically yet still containing the same meaning: Countless workers were murdered brutally in this massacre called Bloody Sunday. ...read more.

A canvas painted totally white can be considered modern art a have little presence of language in its making). Just like maths, some people are born with the gift to be better artists than others. This is an intrapersonal skill that cannot be learned by someone who was born a natural artist. Another argument that supports the importance of language in arts is that to be taught, communication and language must be used. We can conclude that art is an area of knowledge where language is important for some things and unnecessary for others. Combining all the statements claims and counter claims we can conclude that some areas of knowledge require language more than others. However, to be wholesome and richer, and also enabling its teaching the areas of knowledge need language. It is almost impossible in the society we live nowadays to neglect language. Communication is done through symbols and speech and all of the areas of knowledge discussed above use them sometime even if only a bit. From the 3 areas of knowledge we investigated (arts, maths and history); maths and history seems to be the two areas which most rely on language. In my opinion, the answer to the central question ("Does language play roles of equal importance in different areas of knowledge") is no. Language is called for in all areas of knowledge investigated but more in maths and history than in arts. http://anthro.palomar.edu/language/language_2.htm http://communicationnation.blogspot.com/2007/06/what-is-language.html - Source 2 http://www.spartacus.schoolnet.co.uk/RUSsunday.htm http://en.wikipedia.org/wiki/Picasso's_Blue_Period http://en.wikipedia.org/wiki/Mathematics_as_a_language ...read more.