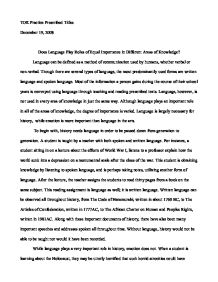 Does Language Play Roles of Equal Importance in Different Areas of Knowledge?

TOK Practice Prescribed Titles December 19, 2008 Does Language Play Roles of Equal Importance in Different Areas of Knowledge? Language can be defined as a method of communication used by humans, whether verbal or non-verbal. Though there are several types of language, the most predominantly used forms are written language and spoken language. Most of the information a person gains during the course of their school years is conveyed using language through teaching and reading prescribed texts. Language, however, is not used in every area of knowledge in just the same way. Although language plays an important role in all of the areas of knowledge, the degree of importance is varied. Language is largely necessary for history, while emotion is more important than language in the arts. To begin with, history needs language in order to be passed down from generation to generation. A student is taught by a teacher with both spoken and written language. ...read more.

These emotions, though widely felt, can do nothing to change to past, to change history. On the other hand, when history is being made, emotions can play a role. If either Eisenhower or Khrushchev had been more reasonable and less emotional about the U-2 incident, Eisenhower could have apologized to Khrushchev for the espionage, and then Khrushchev could have accepted his apology and the Paris Summit conference could have been a success. This would have shortened the war and it would have saved each country millions of dollars in weapons research and development, which would have changed history as we know it today. Primarily, art is dependent upon emotion. Language, even in vocal music, is not entirely necessary because a singer can just sing a range of musical notes and it would be a work of art. If a painter slaps different colored paint onto a blank canvas, the emotions that a viewer may feel could be varied. ...read more.

Also, story telling is a form of art in a way. Imagine a group of people sitting around a campfire at night, listening to legends of an ancient people. The person telling the story uses spoken language to toy with the emotions of the audience and to entertain them. Although language is not entirely necessary in art, some forms do need language in order to be created. In conclusion, some areas of knowledge require more use of language than others. History, of course, needs language in order to be taught and created. In history, one must use spoken language and written language to inform a student of historical happenings, as well as to create it. Art, though some forms of it do require the use of both written and spoken in language, does not rely entirely upon language for its survival. Sculptors, painters, instrumentalists, and some singers do not need language in order to create their art, but the do need emotion. Art could not be created without some form of emotion, whether it be anger, happiness, or fear. Word Count: 890 ...read more.