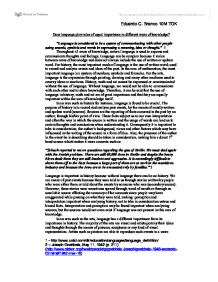 Does language play roles of equal importance in different areas of knowledge? "Language is considered to be a system of communicating with other people using sounds, symbols and words in expressing a meaning, idea or thought." 1 Throughout all areas of knowledge, natural language is used to express and communicate thoughts and feelings. Language can be complex because it varies between areas of knowledge and does not always include the use of written or spoken word. For history, the most important mode of language is the use of written word; used to record and analyze events and ideas of the past. In the area of mathematics, the most important language is a system of numbers, symbols and formulae. For the arts, language is the expression through painting, drawing and many other mediums used to convey ideas or emotions. History, math and art cannot be expressed or communicated without the use of language. Without language, we would not be able to communicate with each other and to share knowledge. Therefore, it can be said that the use of language in history, math and art are of great importance and that they are equally important within the area of knowledge itself. ...read more.

accounts since people may have exaggerated while passing on what they were told, making perception and interpretation important when analyzing history, not to take in consideration untrue and biased facts. Interpretation and perception may be found important when analyzing sources, but the sources would not even exist if language was not present in this area of knowledge. In an area such as the arts, language has a different importance from its importance in history. The majority of the arts are visual and artists portray their ideas and thoughts through the means of pictures, sculptures or any kind of visual representation. Artists such as painters are able to reproduce such events in a more accurate form than writing as they can replicate a past happening identically showing expression and all details. However, in the arts it is much harder to understand the things conveyed, since they are not literal. It is necessary to use our own creativity and emotion in order to attempt to understand what the artist wanted to pass on. Thus, language is not as necessary since we are able to interpret the meaning of what is being presented to us ourselves, without having to be told what we should be thinking of. ...read more.

Language is also important to this area as symbols and numbers make it easy for mathematicians and students to interact and communicate in a concise and universal manner, without restrictions or limitations. In virtue of the facts mentioned, it can be said that language is important to all three of these areas of knowledge. The language used in each area varies, but each holds an equal importance to the communication of knowledge. In history, language is the most important way of knowing. In math, reason is the most important, but math could not exist without language as there would be no mains of passing the information futher. In art, emotion must also be used in edition to language for maximum appreciation. However, language plays a role of equal importance in history, mathematics, and the arts because the importance comes from within the area of language itself. For history, language must be used to record events, for mathematics it must be used to create formulae and impart it on, and for the arts, language must be used to convey thoughts into a piece of artwork through the mains of symbols and visual representations. ?? ?? ?? ?? Eduardo C. Branco 10M TOK 1 - http://www.unixl.com/dir/education/languages/language_definition/ 2 - Joseph Goebbels, May 11, 1942 (p. 211) (http://www.nizkor.org/hweb/people/g/goebbels-joseph/goebbels-1948-excerpts-02.html#1942-mar-16) ...read more.