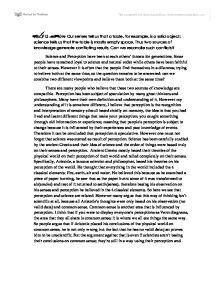 Does language play roles of equal importance in different Areas of Knowledge?

Essay Question: Our senses tell us that a table, for example, is a solid object; science tells us that the table is mostly empty space. Thus two sources of knowledge generate conflicting results. Can we reconcile such conflicts? Science and Perception have been at each others' throats for generations. Some people have remained loyal to science and natural order while others have been faithful to their senses. However it is often that the people find themselves in a dilemma; trying to believe both at the same time, so the question remains to be answered: can we combine two different viewpoints and believe them both at the same time? There are many people who believe that these two sources of knowledge are compatible. Perception has been subject of speculation by many great thinkers and philosophers. Many have their own definition and understanding of it. However my understanding of it is somehow different, I believe that perception is the recognition and interpretation of sensory stimuli based chiefly on memory, the idea is that you had lived and learnt different things that make your perception; you caught something through old information or experience; meaning that people's perception is subject to change because it is influenced by their experiences and past knowledge of events. ...read more.

It is thought, according to this view, that it is not perception/senses that correspond with science but it is reasoning. We tend to gather information using our senses however if that information were just to be placed on our observation then obviously it will be false. We saw earlier in class that our eyes aren't the smartest things on earth as they were easily manipulated by optical illusions. Therefore in order for our observations to be true they must not be based on our senses only but also on reasoning. As a critical thinker, reasoning would a major step in understanding our world. However it can be argued that reasoning isn't very accurate as it is dependent on perception! Our reasoning tends to depend on our perception of the world and our bias towards the topic. For example, a Christian examining a scientific event will probably have a different reasoning than an atheist physicist because they both have their own perception which influenced by their experience and beliefs. So in that sense, reason is flawed just like senses are. But it could be argued that even though reason has its limit due to its dependence on culture and education, it should still be more reliable than senses. ...read more.

If only our language was sophisticated enough to allow us to communicate better, then this problem would be non-existent. You see, it's not that 2 areas of knowledge are at conflict with each other only but it is our common sense that is letting us down. This can be applied to the actual problem as well. We think we are seeing something solid by looking at the table because we were told, as a kid, the definition of a solid which seems to match our sensual image of it. However, we weren't told why the objects looked like solids? There is an actual scientific explanation for it but no one told us. It's not the fact that our senses are completely wrong, it has to do with the fact that our senses are acting on a basis of an incomplete perception. Had our perception been different, if we knew why looked at the table and saw a solid object, if only we understood our sensory limitation and if only we comprehended our perceptual bias then such conflict wouldn't occur. Once all that is achieved we will be able to think of a table as a solid object and empty space at the same time. ...read more.