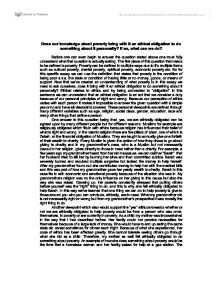 Does our knowledge about poverty bring with it an ethical obligation to do something about it personally? If so, what can we do?

After my grandmother found out she contributed money to help her with the medical bills and this was part of how my grandmother gave her yearly wealth to charity. Sarah in this case fits in with economic and emotional poverty because of the situation she was in. My grandmothers religion was no the only influence on her giving to this cause but also the way she was raised. Growing up, her parents constantly stressed that putting others before yourself was the "right" thing to do, and this is why she felt ethically obligated to help Sarah. In this way we've learned that one thing we can do to help poverty is give to those around you who you can conclude, ethically, are in need. What my grandmother did is not necessarily right or wrong but from my grandmother's prospective it was morally the right thing to do. Another viewpoint which also would support the "yes" attitude towards whether or not we are ethically obligated to help poverty would be from a person who was once, themselves, in poverty or are currently in poverty. ...read more.

This might be because I cannot graduate without having my share of community service hours completed. Many times I also feel guilt-tripped into helping because of the way that my school and the media presents poverty to me. In the end, I've found that not everyone feels ethically obligated to do something about poverty, and even if they do, they wont necessarily do anything about it. Although, many times people do try to do something about poverty. The things we can do about poverty are more than just giving money to people on the streets or donating to charity organizations; we can spread our knowledge to others and start a chain reaction of poverty aide. Maybe then, we can get others to feel ethically obligated to help. I am not saying that it is the right thing to do, but personally, I feel that it is. Not because of a moral obligation but because of guilt. Guilt for having so much more than some people and not having a legitimate reason for why I am more deserving then others. ...read more.