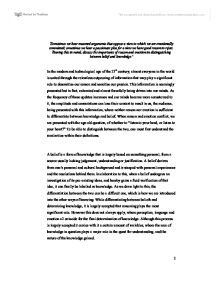 'Sometimes we hear reasoned arguments that oppose a view to which we are emotionally committed; sometimes we hear a passionate plea for a view we have good reason to reject. Bearing this in mind, discuss the importance of reason and emotion in distinguishing between belief and knowledge.' In the modern and technological age of the 21st century, almost everyone in the world is united through the relentless outpouring of information that may play a significant role to desensitise our reason and sensitise our passion. This information is seemingly presented but in fact, reiterated and almost forcefully being driven into our minds. As the frequency of these updates increases and our minds become more accustomed to it, the amplitude and connotations can lose their context to result in us, the audience, being presented with this information, where neither reason nor emotion is sufficient to differentiate between knowledge and belief. When reason and emotion conflict, we are presented with the age-old question, of whether to "listen to your head, or listen to your heart?" To be able to distinguish between the two, one must first understand the similarities within their definitions. A belief is a form of knowledge that is largely based on something personal, from a source usually lacking judgement, understanding or justification. ...read more.

they had been issued, to lead them into using emotion to achieve the result they want and the conclusions they hoped to present. It is by this nature that we are introduced to the flaws behind reasoning and gaining knowledge, as it being a human endeavour, a number of errors and falsehoods are likely to come forward, whether intentional or not, leading to the very question of whether 'true knowledge' is that different from belief after all? As we continue with our exploration of understanding we are introduced to the area of art and music, where the systematical trend of reasoning seems to transition into that of emotion. When dealing with art, a majority of the ways of knowing seem to come forward. However since art is based around a subjective and personal medium, emotions tend to play a bigger role in determining knowledge, due to the ability to communicate one's reactions into one's perceptions and create within oneself, the own perspective on the artwork. As this concept is an entirely individual process based around ones imagination, it explores a problematic explanation into our beliefs, as one cannot imagine without believing in something. ...read more.

When these indicators are placed into the context of today, several problematic issues arise, as both reason and emotion carry a number of internal flaws that influence the way that we distinguish between knowledge and beliefs. When we interpret reasoning at a closer level, we are forced to accept that it is a human endeavour, and as a result of this, it carries a great possibility of errors or falsehoods. Comparatively emotion is a mental state that is in fact fragile to our ways of knowing, which is the reason why many have capitalized on this, to convey their individualistic ideals on the world. For to act in the name of something, one must only believe in it, and not necessarily know the truth behind it. Although the faults in reasoning can be seen as accidental, as it is the nature of the human mind to make mistakes, however emotion can be specifically altered through our personal thoughts, to convey a belief that we believe to be true, however one which can be ultimately false. By looking at all these notions, we are forced to recognize that "the wide gap between knowledge and belief may not be as wide as it is often presented." 1 ...read more.