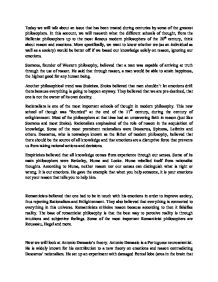 Emotions and reason. In this account, we will research what the different schools of thought, from the Hellenist philosophers up to the most famous modern philosophers of the 20th century, think about reason and emotions

Today we will talk about an issue that has been treated during centuries by some of the greatest philosophers. In this account, we will research what the different schools of thought, from the Hellenist philosophers up to the most famous modern philosophers of the 20th century, think about reason and emotions. More specifically, we want to know whether we (as an individual as well as a society) would be better off if we based our knowledge solely on reason, ignoring our emotions. Socrates, founder of Western philosophy, believed that a man was capable of arriving at truth through the use of reason. He said that through reason, a man would be able to attain happiness, the highest good for any human being. Another philosophical trend was Stoicism. Stoics believed that men shouldn't let emotions drift them because everything is going to happen anyway. They believed that we are pre-destined, that one is not the owner of its own destiny. Rationalism is one of the most important schools of thought in modern philosophy. This new school of though was "founded" at the end of the 17th century, during the century of enlightenment. ...read more.

Romanticists criticize reason because according to then it falsifies reality. The base of romanticist philosophy is that the best way to perceive reality is through intuitions and subjective feelings. Some of the most important Romanticist philosophers are Rousseau, Hegel and more. Now we will look at Antonio Damasio's theory. Antonio Damasio is a Portuguese neuroscientist. He is widely known for his contribution to a new theory on emotions and reason contradicting Descartes' rationalism. He set up an experiment with damaged frontal lobe (area in the brain that chooses between good and bad) patients. He concluded that we need emotions to behave rationally as his emotionally flat patients were completely unable of taking decisions to the point where some of them were unable to choose between meat or fish for lunch. He also concluded that reason and emotion are two complementary systems in the human brain that are responsible for decision making. He therefore stated that one is unable to make decisions and distinguish right or wrong without the control of one of these "systems". With this, he ran against all 20th century philosophical thoughts on emotions and reason. ...read more.

That means that emotions can make you take bad decisions, decisions that can harm you mentally and physically. However, I do not see myself without my emotions. Emotions give you all the beauties of life as well as all the disgraces of life. Without emotions we would be completely neutral. An example where reason wins over emotion is in arranged marriage. Centuries ago, the higher class would arrange marriage for their sons and daughters because their reason told them that by marrying duke X they would gain land X and palace Y. The emotions of their daughters and sons would be ignored making them sad people because they weren't allowed to marry someone for love. An example where emotions win over reason is gender abuse. Woman X is abused by her partner, man X. She is completely in love with man X, therefore, she doesn't report to the police him until one day during his routine beatings he murders her. This is a prime example where emotions are represented as a much stronger force than reason. If woman X had used her reason she would have called the police. However, her emotions prevented her from taking the rational decision. * ...read more.