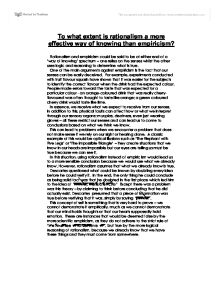 To what extent is rationalism a more effective way of knowing than empiricism? Rationalism and empiricism could be said to be at either end of a 'way of knowing' spectrum - one relies on the senses whilst the other uses logic and reasoning to determine what is true. One of the main arguments against empiricism is the fact that our senses can be easily deceived. For example, experiments conducted with fruit flavour squash have shown that it was easier for the subjects to identify the correct flavour when the drink had the expected colour. People made errors toward the taste that was expected for a particular colour - an orange-coloured drink that was really cherry-flavoured was often thought to taste like orange; a green coloured cherry drink would taste like lime. ...read more.

In this situation, using rationalism instead of empiricism would lead us to a more sensible conclusion because we would use what we already know. However, rationalism assumes that what we already know is true. Descartes questioned what could be known by doubting every idea before he could verify it. In the end, the only thing he could conclude as being solid fact was that he doubted in the first place which led him to the idea of "I think, therefore I am." Except there was a problem was this theory - by claiming to think before concluding that he did actually exist, Descartes presumed that a piece of information was true before verifying that it was, simply by saying 'I think'. ...read more.

However, the main question is when does the data we are provided with rationally become information we can be sure of? Is true knowledge raw data, concluded information or a combination of the two? In some circumstances, using the Coherency Theory of Truth can establish whether a new piece of information is trustworthy: if the new information fits with previously established truths then it must be true. Nonetheless, this still leaves us with the issue of how we can determine information as truth - if our senses can be deceived and logic based on inaccurate information then it could be argued that neither are more effective ways of establishing knowledge. Perhaps, it is more a case of understanding when to use which method - rationalism when our senses are compromised and empiricism when we cannot be certain in what we already know. ...read more.