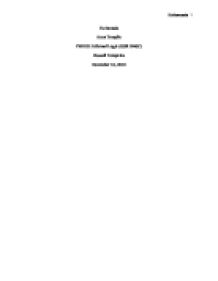 Euthanasia . If people express a desire to die peacefully in their old age after losing all major body functions they should be given the option of euthanasia.

Euthanasia Anna Templin PHI103: Informal Logic (GSK1046C) Russell Tompkins December 16, 2010 Euthanasia Part I: Thesis Euthanasia comes from a Greek word that is defined as being "an easy death, or mode of dying" as defined in the 1929 copy writes of the Merriam Webster Dictionary (p.347). When most people hear the word euthanasia they think of the holocaust. The euthanasia program lead by the Nazi party is not what euthanasia is. Euthanasia is the act of assisted suicide, or the conscience choice "to die with the aid of another person, ideally a physician" (Templin, 2010, �1). Euthanasia is a way for the infirmed and terminally ill to die with dignity, peaceably on their own terms. In many places euthanasia is illegal, but euthanasia should be available for people who suffer from incurable diseases and the infirmed if they no longer have the desire to live. If people express a desire to die peacefully in their old age after losing all major body functions they should be given the option of euthanasia. ...read more.

"Mercy killing" or euthanasia is not helping people or healing them. Also in the Imperial College School of Medicine the Declaration of a New Doctor also states in paragraph four "I shall never intentionally do or administer anything to the overall harm of my patients" (Dunning, Fritzs, Morgan, Rollin, Russell, Sheehan, & et al, 2001). The legalization of euthanasia would put all medical professionals in a position to break their oaths. In research put together by Dick Sobsey and Gregor Wolbring they discuss the lack of educated alternatives to people with disabilities or illness. They argue that "offering people death with dignity while denying access to a life with dignity is no choice" (1995, p. 3). Euthanasia is generalized towards people with disabilities or illnesses. In the bills that have been proposed in the past have been focused on making assisted suicide available to everyone, not only the disabled or ill. Sobsey and Wolbring bring this up to point out that "physicians attempt to heal their patients without disabilities, not kill them" (1995, p.5). ...read more.

"The Greek meaning of euthanasia is a 'painless happy death,' by prolonging pain we would be torturing our patients (Guo, 2006)" (Templin, 2010). The best way to sum things up is from the concluding paragraph for my Composition II augmentative paper. "'Proponents believe that adequate safeguards through proper legislation and due process can limit euthanasia to the situations in which it is most appropriate'" (Kastenbaum, n.d.). There should be limitations and regulations to avoid murder, but if legalized with proper support and specifications, euthanasia could be very positive and effective. I do not think people who are suffering from depression should be able to be euthanatized. I do not think that it should be available to the mentally handicap either. But for those who have lived a full life I agree with the author, Alicia Black, when she states: 'Euthanasia is not murder. Murder is killing someone who does not wish to die. Germans gassing millions of Jews just for the sake of it is murder. Killing a ninety year old man who wants to die with a little bit of dignity is a human act of empathy' (n.d.)" (Templin, 2010). ...read more.