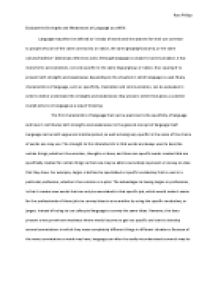 Evaluate the Strengths and Weaknesses of Language as a WOK

﻿Ross Philipp Evaluate the Strengths and Weaknesses of Language as a WOK Language may often be defined as ?a body of words and the systems for their use common to people who are of the same community or nation, the same geographical area, or the same culture/tradition? (dictionary.reference.com). Although language is a basis for communication, it has many forms and variations, not only specific to the same lingual group or nation, thus causing it to present both strengths and weaknesses depending on the situation in which language is used. Many characteristics of language, such as: specificity, translation and communication, can be evaluated in order to better understand the strengths and weaknesses they present, which then gives us a better overall picture on language as a way of knowing. The first characteristic of language that can be examined is the specificity of language and how it contributes both strengths and weaknesses to the general concept of language itself. Language can be both vague and misinterpreted, as well as being very specific in the sense of the choice of words one may use. The strength to this characteristic is that words are always used to describe certain things; whether it be emotion, thoughts or ideas, and there are specific words created that are specifically created for certain things so that one may be able to accurately represent or convey an idea that they have. ...read more.

A big strength to the idea of language being the central concept to communication is that language, whether it be expressed verbally or through gestures (often known as body language), is essentially how we communicate with one another. The benefits to communication through language, is that it is definitely an extremely efficient way of conveying and expressing ideas, as well as being able to teach one another new ideas that have been communicated through books and lectures, which all use language to communicate their ideas to other people. However, communication does have certain weaknesses associated with it, the main one being that communication, can more often than not, be the fault of many problems and incidents that occur in and around the world. Miscommunications due to misspelled words or even simple grammatical errors may introduce an element of confusion that could lead to possible mishaps or mistakes as a direct result of miscommunicated language. There have been many incidents in history where aircraft crashes or the massacre of falsely accused fugitives have occurred as a result of language and how it has been miscommunicated to the personnel. Although communication is what makes language extremely efficient, the many possible mishaps that can occur through the miscommunication of ideas can lead to altering several ways of knowing, especially ...read more.

The ability to translate languages is an amazing characteristic of language providing the ability to gain new knowledge, but there is also a certain element of uncertainty as translated sentences often do not reflect the true meaning of the original extract. In conclusion, even though language is the basis for communication, its strengths and weaknesses cause language to have both positive and negative effects on society as a whole. Translation, communication and specificity are all characteristics of language that definitely allow humans to acquire and gain new knowledge as a result of the effects each characteristic has on the general idea of language as a whole. More importantly, language is definitely an important way of knowing for society to understand, as in order for use to gain this new knowledge that we have found and to teach it to our community, we have to know and understand the idea of language and how it has a significant impact on other ways of knowing such as perception. Language is one of the most advanced accomplishments that mankind as a whole have managed to achieve, and all though it has its drawbacks, language has definitely shaped humans as a species and heavily contributed to the advancement and evolution of human beings. ...read more.