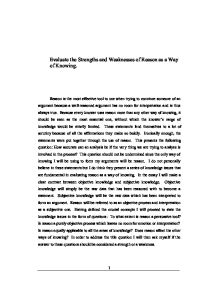 Evaluate the Strengths and Weaknesses of Reason as a Way of Knowing.

Evaluate the Strengths and Weaknesses of Reason as a Way of Knowing. Reason is the most effective tool to use when trying to convince someone of an argument because a well-reasoned argument has no room for interpretation and is thus always true. Because every knower uses reason more than any other way of knowing, it should be seen as the most essential one, without which the knower's range of knowledge would be strictly limited. These statements lend themselves to a lot of scrutiny because of all the affirmations they make so boldly. Ironically enough, the statements were put together through the use of reason. This presents the following question: How accurate can an analysis be if the very thing we are trying to analyze is involved in the process? This question should not be undermined since the only way of knowing I will be using to form my arguments will be reason. I do not personally believe in these statements but I do think they present a series of knowledge issues that are fundamental in evaluating reason as a way of knowing. In the essay I will make a clear contrast between objective knowledge and subjective knowledge. Objective knowledge will simply be the raw data that has been reasoned with to become a statement. ...read more.

Now we understand that when we make an appeal to reason we are trying to go back to the basic statements which formed that argument. Then we try to guide the other person through our process of reasoning. Eventually the process will stop being objective and become more dependant on interpretation, but it is the debater's challenge to try to reason with the other person to get him as far through the process as possible in order to convince him. In a familiar context where one is debating with a person of the same beliefs it is easier to reason because his interpretations will be similar to ours. However, if we change the context dramatically, reasoning will become harder because now the bases of the argument will have a lot less in common. Therefore, the extent to which reason can be considered objective depends solely on the common ground that exists between the knowers. Consequently, reason becomes harder to use as a persuasive tool when there are less common grounds. In response to the title question, the usefulness of reason is neither a strength nor a weakness since it depends too much on the context and on how the knower uses it. ...read more.

The more we use reason here, the more we realize that we can only perceive of the atom as an abstract concept. Likewise, reason allows us to make the correct decision when emotions cloud our judgment. In contrast to the weakness, I believe this to be an extremely powerful application of reason. Hopefully if the reader now reads the first two sentences of the essay again he will be able to say, with a greater degree of certainty than before, what is wrong with them and why. In summary, reason has one major weakness; it cannot be used to obtain new types of knowledge. It also has one major strength though, and that is that it serves as a check for all the other ways of knowing. Its use in arguments can be considered a strong point if it is used properly and in the right context, but if not; it will not help at all. As a final remark I will declare that in my opinion reason is given too much credit as a way of knowing. It is blatantly placed above all the others and defended with petty arguments that attempt to credit it. If we applied reason to our reasoning process too we would learn how wrong we can sometimes be. ...read more.