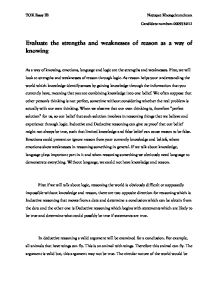 Evaluate the strengths and weaknesses of reason as a way of knowing As a way of knowing, emotions, language and logic are the strengths and weaknesses. First, we will look at strengths and weaknesses of reason through logic. As reason helps your understanding the world which knowledge identify senses by gaining knowledge through the information that you currently have, meaning that you are combining knowledge into one belief. We often suppose that other person's thinking is not perfect, sometime without considering whether the real problem is actually with our own thinking. When we observe that our own thinking is, therefore "perfect solution" for us, so our belief that such solution involves in reasoning things that we believe and experience through logic. Inductive and Deductive reasoning can give us proof that our belief might not always be true, such that limited knowledge and false belief can cause reason to be false. Emotions could prevent or ignore reason from your currently knowledge and beliefs, where emotions show weaknesses in reasoning something in general. If we talk about knowledge, language plays important part in it and when reasoning something we obviously need language to demonstrate everything. Without language, we could not have knowledge and reason. ...read more.

Beliefs could be both strength and weakness of reason. As we can see from the individuals that people often left out other persons' beliefs to overcome their own beliefs, for example one person might say "Why do I have to believe in God? I have never seen him, so I don't know whether he's real or not." and other person may have a controversy argument that "I do believe in God because the Bible shows me what he does." this could be a weakness of reason. The strength could be that reason attempt to discover what is true, for example Darwin said that "Evolution is the process of cumulative change in the heritable characteristics of a population" he shows that he had discovered the true about evolution though his study by using reason. Through perception, "Is everything we see is real?" The answer is No; we might see 4 - 5 legs or even more legs on an elephant in the picture. Our senses do not always give us a true which means perception is the weakness of reason because what we see might not always be true. For emotions, reasons neglect emotions like anger, fear, frustration and amazement. ...read more.

This is an emphasis on the chronological, rather than the position of the punching bag. To be able to reason, we need to think, thus we need a medium to think, language provides it. For example, in mathematics, we use symbols to logic out the problem and deduce the result. These symbols are forms of language. However, the divides between colours may be different, for example yellow and orange, but this does not imply that people speaking different languages do not perceive the difference between a darker orange and a lighter orange. Through this, we can see that people are capable to perceive the "object" overcoming the biases that language may impose. Languages form strengths as a way of knowing by including emotions. Conversely, though perceptions, language are biased and we may preference one thing to another, such as colours. It seems clear that reason has strengths and weaknesses as a way of knowing because knowledge is obtained from the nature, language, emotion and logic where all these aspects have different conclusion on each aspect. As a way of knowing, reason can partly help us understand way we know things better though reason where strengths and weaknesses have only just fulfilled a probability to improve our knowledge through reason. ...read more.