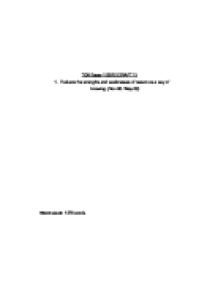 TOK Essay 1 /2012 (DRAFT 1) 1. Evaluate the strengths and weaknesses of reason as a way of knowing. (Nov 08 / May 09) Word count: 1378 words Reason is defined as "the way of knowing that allows us to reach sound conclusions as well as convince others that our arguments are valid." (Dombrowski, 2007) It is considered a reliable way of knowing since it uses facts to derive hypotheses, which are tested to either confirm or disprove them. Reason, therefore, has the ability to use logic and analysis to assist people in discerning truth from what is objectionable. In this essay, I will evaluate the strengths and weaknesses of reason in its ability to attain knowledge. As mentioned above, reason approaches arguments with logic to distinguish between a valid and invalid argument in order to ascertain truth in a conclusion. The act of reasoning itself is divided into two categories: deductive and inductive reasoning. In deductive reasoning, a conclusion is drawn from two or more premises. However, for the conclusion of a logical argument to be true, the premises must first and foremost be true. If the premises, statement A and B, are true and the structure is valid, we are somehow compelled to accept that statement C, the conclusion, is also true. ...read more.

In this area of knowledge, one begins with certain established assumptions, axioms, and approaches the problem rationally to obtain results in the form of theorems. The theorems are considered certain after proof is provided to justify the proposed theorem with the reference to the axiom. In fact, philosopher Immanuel Kant claimed that "mathematics claimed the most resplendent example of pure reason happily expanding itself without assistance from experience". This is true to a certain extent as mathematical equations, once proven, are indisputable. For example, 0 X 3 = 0 and this is a proven fact in any case as the theory that any number multiplied by 0 is also 0 exists to support this truth. This clearly illustrates the strength of reason in delivering solid results in mathematics. Thus, a strength of reason is that it aids in the acquiring of stable and certain facts. Conversely, one weakness of reason is that it can result in the construction of two equally valid arguments which conflict each other and, therefore, cannot arrive at a certain conclusion. This is most evident in ethics. In justifying an act as moral or immoral, one goes through the process of considering evidence and agreeing on principles to attain a moral conclusion. If we were to consider the statement "animal experimentation is wrong", we would then have to find other statements like "animals are capable of feeling pain" or "the lives of all living things are sacred" to support our ethical argument. ...read more.

This person's emotional response to the song created meaning in his mind which becomes his own knowledge. One's knowledge of art can be impossible to rebuke because it is a personal interpretation and can be justified in its own way. Therefore, reason is weaker than emotion as a way of knowing in art as the former cannot provoke the same level of response to an artwork and is limited to the facts on the surface. As such, reason is sometimes not as effective on its own as a way of knowing. In conclusion, although reason shows us how to proceed with the given knowledge and corrects errors in conclusions in order to achieve more comprehensive insights, it is not the strongest way of knowing. Reason neglects the personal opinions of the person proposing premises of an argument which impacts its ability to attain sound and certain conclusions in ethical arguments. Also, the strength of reason as an independent way of knowing is limited, as there is a need for it to work in conjunction with the other ways of knowing namely sense perception, emotion and language, in order to fully construct and justify knowledge. Thus, reason is not infallible, but it does have its strengths as a way of knowing by using logic to determine which conclusions are valid and sound. ...read more.