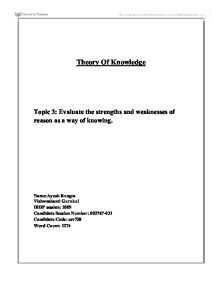 Theory Of Knowledge Topic 3: Evaluate the strengths and weaknesses of reason as a way of knowing. Name:Ayush Rungta Vishwashanti Gurukul IBDP session: 2009 Candidate Session Number: 002767-031 Candidate Code: csv758 Word Count: 1274 Topic 3: Evaluate the strengths and weaknesses of reason as a way of knowing. "Reason is a way of thinking characterized by logic. It is the ability to think, understand and draw conclusions. It is often contrasted with emotionalism, which is thinking driven by desire, passion, or prejudice."[1] Reasoning is very important in our daily life. Every time we do something there is a reason behind it. Reasoning is a way of knowing, which will bring about a logical conclusion to what we are doing. Whether what we are doing is right or wrong. For example: A casual smoker can reason whether smoking is good for him or not by reasoning out. As he knows that smoking will affect his health and he will ruin his life. There is no gain in smoking but he is wasting his time and money which is not worth it. He is risking his life for few minutes of pleasure. So he can clearly see that what he is doing is wrong. ...read more.

No matter how many times his parents warn him. He will only understand what it means when he is injured by that sharp knife. He will go through the pain and bleeding. That is a child's experience and knowledge about this object. He will be careful in the future. He will learn as he grows up. His parents warned him because they had knowledge about the sharpness of knife and how injurious it can be. They have also learnt it the same way. So the next time we do something we will try reasoning it. In science and mathematics we reason with facts and proved theorems. It acts as backbone for us to deal with experiments and solving. Scientist does research with reason that they can discover or invent new facts. Newton's Third Law stated that "Every action has equal and opposite reaction" [2] this was derived by many experiments. A very simple example to support this law is in sports. Cricket, when the ball is coming towards the batsman it is hit by the bat and the ball goes in the opposite direction with a greater speed due to the force applied by the bat. This is how they reason out. ...read more.

[3] http://derrel.net/math/euclid/euclid.htm More than reason, emotions and feelings play a greater role in a language as a way of knowing. It is more important to explore the feelings of the characters so that the readers can relate it to their life, rather than reason it with wit and ethics. For Example: In Doll's house Nora has an attitude towards spending more money than the total income. Here she has attitude of living life in a luxurious way. So to understand her character, language and emotions play imperative role in knowing them. Another area of knowledge where reason proves to be subjective and personal is art. An artist makes more use of the artistic sense/skill within him to produce his painting. Creativity and his own concepts are portrayed in an artist's work, and consequently reasoning is personal based on his own ideas and conventions of art. Here people have different perception about the different art. Perception greatly varies from one people to another people. Reason is an indispensible part of a judgment for decision making but it can be subjective and not necessarily identical to another person's point of view. Reasoning depends on the premises of logic if premises are right my conclusion through reasoning will be correct and if the premises are weak my interpretation will be wrong. Reasoning is best when it is supported by fact and information and analyzed systematically without bias and prejudice. ...read more.