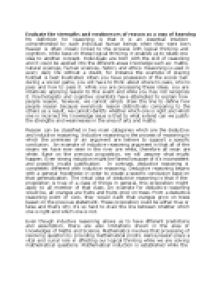 Evaluate the strengths and weaknesses of reason as a way of knowing. My definition for reasoning is that it is an essential intuition

﻿Evaluate the strengths and weaknesses of reason as a way of knowing My definition for reasoning is that it is an essential intuition comprehended by each individual human beings when they were born. Reason is often closely linked to the process with logical thinking and cognition, while base on these logical thinking, it enables us to relate one idea to another concept. Individuals are born with the skill of reasoning and it could be applied into the different areas knowledge such as: maths, natural sciences, human sciences, history and ethics. Reasoning is used in every daily life without a doubt, for instance the example of playing football is best illustrated. When you have possession of the soccer ball during a soccer game, you will have to think about where to pass, who to pass and how to pass it. While you are processing these ideas, you are intuitively applying reason to this event and while you may not recognize it. Psychologists and cognitive scientists have attempted to explain how people reason, however, we cannot simply draw the line to define how people reason because everybody reason distinctively comparing to the others as a result, we cannot identify whether which one is right and which one is incorrect My knowledge issue is that to what extend can we justify the strengths and weaknesses in the area of arts and maths. ...read more.

For instance, the example where an asset may depreciate by a fixed amount per year. If the initial cost of the asset is costed $100 and it depreciates $5 per year then the value of depreciation follow an arithmetic progression The strength of applying inductive reasoning in the mathematical world is that it trains people to think logically while providing feasible mathematical proofs at the same time. According to David Hume, a scottish Philosopher, he suggested ?the fact that our everyday habits of mind depend on drawing uncertain conclusions from our relatively limited experiences rather than on deductively valid arguments? (Problem of induction. 2012, May 8) He further argues that it?s basically impossible to justify inductive reasoning because justification and inductive reasoning have a circular relationship. This shows that how unreliable inductive reasoning. Is reasoning trust-worthy? Even though he suggested that inductive reasoning is unjustifiable, we would still have to rely on it. Another philosopher of science, Karl Popper, ?argued that that science does not use induction, and induction is in fact a myth? (Problem of induction. 2012, May 8) Karl Popper illustrated the point that inductive reasoning is asking how to justify theories given that they cannot be justified by inductive reasoning. As a result, in certain extent reasoning in certain aspect might not be as authentic as we thought. So, is reasoning a legitimate and reliable ways of knowing? ...read more.

However, I believed that the weaknesses outstrip the strength in the art aspects. Furthermore, to have a better knowledge of the strength and weakness of reasoning, we can compare reason to another way of knowing which is perception. Rationalism is the beliefs or theory that should be based on reasoning instead of emotional feelings.(Rationalism. 2012, June 3) However, Empiricists would argue that theory of knowledge should be based on sensory experiences. (Empiricism. 2012, May 30) These two antithetical concepts allows us to draw the difference between reason and perception. In this case, reason consider the factual evidence while empiricist only consider the knowledge base on their sensory experiences. One sensory experience might be different because of pass experiences, however, rationalist rely on reasoning and factual evidences. These proofs will eventually increase our reliability and validity of the event. As we can see from the above illustration, we can tell that reasoning consider a wider range of supportive evidence rather than perception?s sensory experience. Hence, we could say that reason as a way of knowing are more trust worthy than perception. In conclusion, reason as a way of knowing have a certain extent of reliability however, it still has it own flaws. The strengths and weaknesses could be illustrated from the above examples: the comparison between perception (Empiricism) and reason (Rationalism) and the example of reasoning art and math spectrum. I believed that strengths and weakness of reasons are almost equally the same and it?s extremely difficult to draw the line between which has more strengths or weaknesses. ...read more.