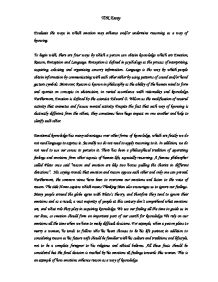 Evaluate the ways in which emotion may enhance and/or undermine reasoning as a way of knowing.

TOK Essay Evaluate the ways in which emotion may enhance and/or undermine reasoning as a way of knowing. To begin with, there are four ways by which a person can obtain knowledge which are Emotion, Reason, Perception and Language. Perception is defined in psychology as the process of interpreting, acquiring, selecting and organizing sensory information. Language is the way by which people obtain information by communicating with each other either by using patterns of sound and/or hand gesture symbols. Moreover, Reason is known in philosophy as the ability of the human mind to form and operate on concepts in abstraction, in varied accordance with rationality and knowledge. Furthermore, Emotion is defined by the scientist Edward O. Wilson as the modification of neutral activity that animates and focuses mental activity. Despite the fact that each way of knowing is distinctly different from the others, they sometimes have huge impact on one another and help to clarify each other. ...read more.

This is an example of how emotions enhance reason as a way of knowledge. Emotions are classified into four different types which are Instinctive Emotions, such as anger and love, Social emotions such as guilt and shame, Inward-Looking emotions such as fear, where we are 'drawn into ourselves' and Outward- Looking emotions, such as wonder, where we are drawn 'out of ourselves'. The problem of classification is that it is never neutral. Emotions are bound up with our bodies - they have a visceral component. When we are angry or frightened, for example, our heart thumps, our breathing speeds up and adrenaline releases fuel from the liver. We would conclude that those reactions are a result of our inward emotions, and emotions cause changes in our body. However, one philosopher called William James suggest that emotions are purely and simply our experience of a bodily reaction to an event. However, experiments have shown that there is more to emotion than response to bodily effects. ...read more.

Furthermore, we will not be happy if someone dear to our hearts suddenly dies, or during an argument with someone, or when Oman's national football team loses the Gulf Cup. There has to be a reasoned judgment before we 'know' what emotion to feel. We need the input of our senses so that the reasoning can take place. In addition, we cannot feel an emotion about something if we don't know anything about it. Finally, it appears that emotion we experience comes after empirical data has been processed rationally. We might think that emotion is derivative from these two primary ways of knowing. I can know anything about anything, but I can only feel about things/people that have some personal impact on me. Last but no least, Emotions are vital characteristics of any human being engaged in a physical world which is indifferent to human needs. With no emotions there can be no goals, and no being-in-the-world, as some philosophers have called it. Emotions are considered by many philosophers as the central aspect of human life. Class; - 2nd Secondary / IB first year ...read more.