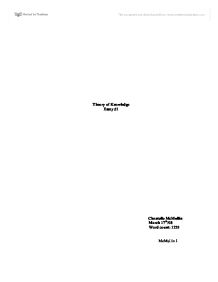 Evaluate the ways in which emotion might enhance and/or undermine reasoning as a way of knowing.

Theory of Knowledge Essay #1 Chantelle McMullin March 17th/08 Word count: 1229 McMullin 1 Evaluate the ways in which emotion might enhance and/or undermine reasoning as a way of knowing." "Though this be madness, yet there is method in't" is a common quote from a famous Shakespeare tragedy. It says that one may use emotion and madness as a disguise for their real plan. That you can use emotion to help make important decisions. But is this true or does emotion just get in the way and lead us to make rash decisions that we will later regret? First of all to define reasoning. Reasoning is the mental (cognitive) process of looking for reasons for beliefs, conclusions, actions or feelings. Humans have the ability to engage in reasoning about their own reasoning using introspection. Different forms of such reflection on reasoning occur in different fields. Many people believe that they make decisions using their brain, but is this true or do they make them using their heart? What many people do not consider is the fact that our emotions do play a big role within our thinking. ...read more.

Let's look at some well known examples of people who made important decisions based on emotion. Aldolph Hitler for example felt a profound emotional revulsion towards the Jews. With all of this emotion and passion , he not only lost sight of reality himself but managed to persuade others to do the same. When someone is very emotional and passionate about something it can be seen when they speak and also looks very convincing to others. Hitler not only let his emotions and irrational prejudices destroy his perception of reality, but turned them into insight into reality justified in some way by his emotional intensity. By letting emotions undermine reasoning as a way of knowing there McMullin 3 were the horrific results of the Holocaust. This is a sad example of how emotions used incorrectly as knowledge can have devastating results and many innocent lives can be lost. Another great example in the Shakespearian tragedy "King Lear". Lear let his emotions of the moment; anger, rage and disbelief overrule his better judgment. When his daughter did not give him the answer he wanted to hear he did not realise that it did not mean she didn't love him. ...read more.

When we are younger we depend on emotions to communicate what we want or need. We depend on our parents ability to use emotions as a way of knowing what we want. It is almost impossible to keep emotions from interfering at all, for everything we do is based on emotion but we should try to keep it from interfering too much and being the sole cause of our decision. Also, if you are trying to make a group decision it helps to convince others if you are passionate. If you let your emotions show others will agree based on their emotions. But on the other hand emotion can definitely undermine reasoning as a way of knowledge. Emotion can not be used as knowledge and if they are, it can led to bad decisions that we will later regret when we have time to calm down and think them over. My opinion would be that emotion both enhances and undermines reasoning as a way of knowing. It can be both helpful and hurtful and you have to be very careful when making decisions based on it. I would suggest to use emotion not as knowledge, but as a tool along with knowledge. We have to make decisions with both our heads and hearts! ?? ?? ?? ?? ...read more.