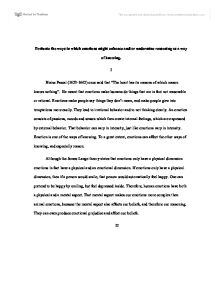 Evaluate the ways in which emotions might enhance and/or undermine reasoning as a way of knowing.

Evaluate the ways in which emotions might enhance and/or undermine reasoning as a way of knowing. I Blaise Pascal (1623-1662) once said that "The heart has its reasons of which reason knows nothing". He meant that emotions make humans do things that are in fact not reasonable or rational. Emotions make people say things they don't mean, and make people give into temptations more easily. They lead to irrational behavior and to not thinking clearly. An emotion consists of passions, moods and senses which then create internal feelings, which are expressed by external behavior. That behavior can vary in intensity, just like emotions vary in intensity. Emotion is one of the ways of knowing. To a great extent, emotions can affect the other ways of knowing, and especially reason. Although the James-Lange theory states that emotions only have a physical dimension emotions in fact have a physical and an emotional dimension. If emotions only have a physical dimension, then if a person would smile, that person would automatically feel happy. One can pretend to be happy by smiling, but feel depressed inside. Therefore, human emotions have both a physical and a mental aspect. That mental aspect makes our emotions more complex then animal emotions, because the mental aspect also affects our beliefs, and therefore our reasoning. They can even produce emotional prejudice and affect our beliefs. ...read more.

Emotion also affects language as a way of knowing. When one feels a powerful emotion, that emotion can affect people because they express their internal emotions externally with the usage of language, and one might say things that one does not mean. IV One might think that it is better not to have emotions at all, but that is not true. The Stoics wanted a world with apathy, which literary means "without passion". The Stoics thought that if they could ban emotions out of their lives, then things would be much clearer and more logical for everyone. One cannot ban all emotions from one's life. For example, when a Stoic, who decided to ban all emotions out of his life, meets someone that is bigger, stronger, and ready to fight the Stoic, the Stoic's brain will try to find the nearest exit. This experience triggers the Stoic's brain to send an emotion throughout the Stoic's body. That emotion is fear. Therefore, it is not possible to just ban emotions, although it is possible to have better control over emotions. V Although it has been stated earlier that emotions can lead to poor decision making, emotions can also help when one has to make decisions. Emotions narrow down the options when we make decisions. When we make a decision, all options that lead to different outcomes of that decision provoke a certain emotion within ourselves. ...read more.

For example, when you are sitting alone in a room in the dark, you know that the chance that a big vicious monster will come into that room and kill you is very slight; the emotion that you feel alone in the dark is fear for something that you know is highly unlikely to occur. It is irrational to fear that monster, but still it is very difficult to set that feeling aside. VIII The problem that arises when trying to evaluate this subject is that it is hard to define how much emotions really influence reasoning. In every circumstance no one experiences exactly the same emotions, and no one is affected by their emotions exactly the same way. Emotion can both enhance and undermine rational reasoning because they are so closely connected. Emotional coloring by powerful emotions can lead to a biased perception and poor decision making. On the other hand emotions can also help narrow down possibilities when making decisions. Emotions can be reasonable at times when they are based on a truthful view of reality in specific circumstances. Still, emotions cloud the way that we perceive experiences, and make us see things in an unclear way. Although we should not try to ban emotions like the Stoics wanted, it might be an improvement to have a better control of our emotions. The question that evolves from this essay is how we can achieve rationality and better emotional control without losing the advantages that emotion can bring us. ...read more.