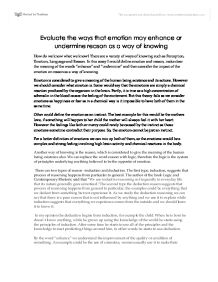 How do we know what we know? There are a variety of ways of knowing such as Perception, Emotion, Language and Reason. In this essay I would define emotion and reason, make clear the meaning of the words “enhance” and “undermine” and then consider the impact of the emotion on reason as a way of knowing.

Emotion is considered to give a meaning of the human being existence and its actions. However we should consider what emotion is. Some would say that the emotions are simply a chemical reaction produced by the organism in the brain. Partly, it is true as a high concentration of adrenalin in the blood causes the feeling of the excitement. But this theory fails as we consider emotions as happiness or fear as in a chemical way is it impossible to have both of them in the same time.

Other could define the emotion as an instinct. The best example for this would be the mothers love, if something will happen to her child the mother will always feel it with her heart. However the feelings like faith or mercy could rarely be caused by the instinct as those emotions sometime contradict their purpose. So, the emotion cannot be just an instinct.

For a better definition of emotions we can mix up both of them, so the emotions would be a complex and strong feeling involving high brain activity and chemical reactions in the body.

Another way of knowing is the reason, which is considered to give the meaning of the human being existence also. We can replace the word reason with logic, therefore the logic is the system of principles underlying anything believed to be the opposite of emotion.

There are two types of reason –induction and deduction. The first type, induction, suggests that process of reasoning happens from particular to general. The author of the book Logic and Contemporary Rhetoric said that “We use inductive reasoning so frequently in everyday life that its nature generally goes unnoticed."The second type the deduction reason suggests that process of reasoning happens from general to particular, the examples could be everything that we deduct from something but not experience it. As we study the deduction reasoning we can say that there is a pure reason that is not influenced by anything and we use it to explain while induction suggests that everything we experience comes from the outside and we should learn it to know it.

By the word “enhance” we understand the improvement of the quality or condition of something. An example could be the use of cosmetics, women usually use it to make their appearance to look better. But the concept of making something better can the bad for the other person. For example the blonde hair, if I say that the blonde hair should suit every woman I would be wrong. As the hair color depends individually for each woman. Finally we can say that the word enhance cannot be used for the generalization.

The word “undermine” is very polygenic.  In the daily life it is used to express the injuring or weakening not of the ground or wall but of the principles like reason of friendship. This definition is a metaphorical way to express the weakening of something.

It is believed that the emotion can enhance reason. As the word enhance cannot be used for the generalization it should be some special cases to state that the statement is true. The example for emotion enhancing reason might be the situation when the student read the book which was set compulsory by their teacher, but because the student is interested in destiny of the book he has a motivation to finish the book until the end. In this example the student has the reason to read the book, which is motivated not only because the book is compulsory but also because the student is curious about the ending of that book, which is an example of emotion. So, if the student is more likely to be interested in the reading of the book by his own then is more likely for him to finish it faster, therefore the emotion is a motivating factor. But the emotion can be used also as a way of knowing own. In subjects like history or literature the emotion is a necessity rather than an option, as with the aid of the emotion we are more likely to understand what happened in the past.

On the other hand emotion can undermine reason, weakening it even replacing it. It might be in the situations when the reason for doing something is based only emotionally, for example crying , as we cry because we are hurt by  something or running because of the fear. Emotion can be also a motivator , if the absence of the interest disappears than the productivity will decrease. For example if the student is not interested in one special subject than the interest will slow down his marks for the subject. But if the reason is a deduction it means that it should not be affected by emotions and the reason should be clearly and unaffected.

However the humans combines both: reason and emotion and use them both as a way of knowing. The two examples can be considered as two different views, as two extremes. In different cases it would be either emotion or reasoning taking place over each other. The perfect solution would be a balance between them both.