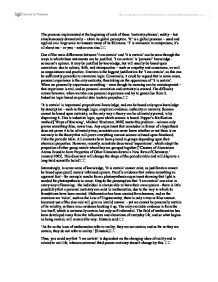 Evidence. One of the main differences between I am certain and it is certain can be seen through the ways in which these statements can be justified. I am certain is personal knowledge - someones opinion.

The pronoun implemented at the beginning of each of these 'certainty phrases', subtly - but simultaneously dramatically - alters its global perception. 'It' is a global pronoun - used and applied on a large scale to reassure many of its followers. 'I' is miniscule in comparison; it's all about me - or you - and no one else.?? One of the main differences between 'I am certain' and 'it is certain' can be seen through the ways in which these statements can be justified. 'I am certain' is 'personal' knowledge - someone's opinion. It may be justified by knowledge, but will usually be based upon conviction- due to culture, faith, and introspection - such as empathy and conscience, as well as acquaintance and practice. Emotion is the biggest justification for 'I am certain', as this can be sufficiently powerful to overcome logic. Conversely, it could be argued that in some cases, personal experience is the only certainty, thus taking on the appearance of 'it is certain'. When we personally experience something - even though its meaning can be misinterpreted - that experience is real, and so personal conviction and certainty is created. The difficulty comes however, when we take one personal experience and try to generalise from it. ...read more.

With capital punishment, it cannot be pronounced that 'it is certain' that someone guilty of murder should be put to death, as there is a lack of actual proof that this is morally right - no empirical knowledge or universal logic can be placed upon this statement to make it certain, although it could, in theory, be shown that capital punishment acted as a deterrent and so, on utilitarian grounds, saved more lives than it took. In courts, the jury are asked to prove 'beyond reasonable doubt' that the accused is guilty. Thus, even if each member of the jury is personally certain that the defendant is guilty, they do not need to prove that it is certain - just beyond reasonable doubt, which is a hazy line of precision. Yet, the very implementation of laws that condemn criminals is placing a field of universal certainty around such ethical topics. In the Netherlands, assisted suicide has been legalised, yet in England such practices remain illegal. This presents the dilemma of varying universal certainty. British law is pronouncing a certainty of the immorality of assisted euthanasia - certain to all British citizens through law, yet in the Netherlands the certainty created by a law is that assisted euthanasia is not wrong. ...read more.