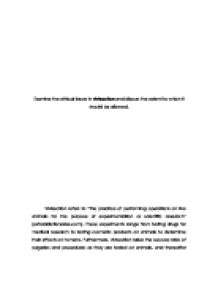 Examine the ethical issues in vivisection and discuss the extent to which it should be allowed. Vivisection refers to "the practice of performing operations on live animals for the purpose of experimentation or scientific research" (oxforddictionaries.com). These experiments range from testing drugs for medical research to testing cosmetic products on animals to determine their effects on humans. Furthermore, vivisection raises the success rates of surgeries and procedures as they are tested on animals, and thereafter improved on, before they are conducted on people. Hence, many people support vivisection, as it seems to benefit the majority of humankind. Small mammals, such as rats, primates and cold-blooded animals are commonly used in laboratories and it is estimated that, each year, over one hundred million animals are killed as a result of experiments (peta.org). Thus, others argue against vivisection, claiming that such experiments cause the animals tremendous pain, often leaving them severely injured or dead, which is unethical since animals are still living beings. However, although vivisection causes animals to suffer, some experiments are still crucial and beneficial to humanity. Therefore, vivisection should be allowed provided the experiments conducted are absolutely necessary as the results can benefit humankind greatly, if there is a high success rate which minimizes the extent of harm inflicted on the ...read more.

Therefore, they believe that if it is unethical to intentionally harm a person, the same rule should apply to animals that can also suffer. Furthermore, Kant opposed such cruelty to animals, as it is not one's moral duty to cause living things to suffer (Robinson 146). This is reiterated in Buddhist teachings where it is believed that all beings are afraid of injury and death, making it wrong to intentionally harm a living thing. Therefore, these people believe that vivisection should be disallowed as they feel too many animals are being killed and injured in the process and it is unfair to treat them like disposable tools for research. There needs to be a balance between the pros and cons of vivisection to ensure that scientific and medical research can develop without excessively harming animals in the process. As such, ethical guidelines can be established to allow vivisection to continue to benefit mankind as long as the experiments are absolutely necessary and the suffering of animals is kept to a minimum. The first ethical boundary can be to allow vivisection only when the experiment and its results are needed for medical and scientific progress which will be beneficial to mankind and that there are no alternative methods to conduct these experiments. ...read more.

Although Harlow may have discovered a great deal about mother-infant bonding, it has been questioned if it could have been done without putting the monkeys through such brutal conditions. Therefore, it is unjustified to deliberately leave animals dead or badly injured and deformed as they made to suffer both physically and psychologically. One suggestion to ensure that animals are out through a minimum amount of suffering would be for the government to implement a quota on the maximum number of animals which can be tested on for each test in order to reduce the number of animals which are harmed. Additionally, the number of tests can be reduced if as much information is extracted out of each experiment and shared internationally to avoid repeated tests where animals are harmed. Lastly, encouraging the use of pain-relieving drugs, size requirements for cages, etc, can reduce animal suffering in experiments. In conclusion, there needs to be a compromise between human benefit and the suffering of animals. If such a line is not drawn, more and more animals will be intentionally harmed for the needs of humankind which is unethical. Thus, it is necessary that any experiment can produce critical results and the animals are treated as humanely as possible. ...read more.