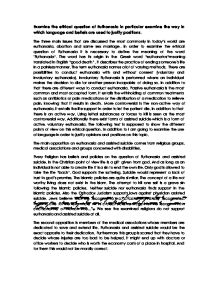 Examine the ethical question of Euthanasia in particular examine the way in which language and beliefs are used to justify positions.

Examine the ethical question of Euthanasia in particular examine the way in which language and beliefs are used to justify positions. The three main issues that are discussed the most commonly in today's world are euthanasia, abortion and same sex marriage. In order to examine the ethical question of Euthanasia it is necessary to define the meaning of the word "Euthanasia". The word has its origin in the Greek word "euthanatos"meaning translated in English "good death". It describes the practice of ending someone's life in a painless manner. The term euthanasia names a lot of varying methods. There are possibilities to conduct euthanasia with and without consent (voluntary and involuntary euthanasia). Involuntary Euthanasia is performed where an individual makes the decision to die for another person incapable of doing so. In addition to that there are different ways to conduct euthanasia. Passive euthanasia is the most common and most accepted form. ...read more.

Also the Orthodox Judaism supports laws against physician assisted suicide. Jews believe that the recognition of a constitutionally recognized right to die for the terminally ill is a clear statement against the recognition and sanctity of human life..."1. We see the examined religions do not support euthanasia and assisted suicide at all. The second opposition is members of the medical associations whose members are dedicated to save and extend life. Euthanasia and assisted suicide would be the exact opposite to their dedication. Furthermore this group is scared that they have to decide whose injuries are too bad to be helped. It might end up with doctors or office workers to decide who is worth the economy costs of a place in hospital. And for them this would not be morally correct. Being concerned with disabilities the third group opposing euthanasia fears that a legalization of euthanasia is the first step to a society that will kill disabled people against their will. ...read more.

The first rhetorical objective I realized used by the pro life fraction is a "slippery slope"3. A "slippery slope" is a rhetorical objective whereby different situations are based on each other but the way they are connected is usually very senseless. Trying to evoke charity the other side's argumentation is based on imagery. They describe the worst case scenario, a case in which euthanasia or assisted suicide appears right to most of the population. The picture of a man or a woman who is not able to do anything anymore, not even to kill his or herself, could possibly evoke pity in most of the people in this population. I think it is not possible to state if euthanasia and assisted suicide are ethical right or not. The fact that we do not know what is happening afterwards we are not able to judge if this is worth to die. 1. http://www.religioustolerance.org/euth2.htm 2. http://www.religioustolerance.org/euth2.htm 3. Structure of a slippery slope: Situation A causes Situation B which causes Situation C which is bad. So we have to prevent situation A in this case the legalization of Euthanasia. ...read more.