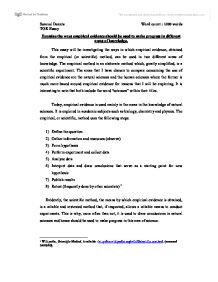 Examine the ways empirical evidence should be used to make progress in different areas of knowledge. This essay will be investigating the ways in which empirical evidence, obtained from the empirical (or scientific) method, can be used in two different areas of knowledge. The empirical method is an elaborate method which, greatly simplified, is a scientific experiment. The areas that I have chosen to compare concerning the use of empirical evidence are the natural sciences and the human sciences where the former is much more based around empirical evidence for reasons that I will be exploring. It is interesting to note that both include the word "sciences" within their titles. Today, empirical evidence is used mainly in the areas in the knowledge of natural sciences. It is explored in academic subjects such as biology, chemistry and physics. The empirical, or scientific, method uses the following steps: 1) Define the question 2) Gather information and resources (observe) 3) Form hypothesis 4) Perform experiment and collect data 5) Analyze data 6) Interpret data and draw conclusions that serve as a starting point for new hypothesis 7) Publish results 8) Retest (frequently done by other scientists) 1 Evidently, the scientific method, the means by which empirical evidence is obtained, is a reliable and reviewed method that, if respected, allows a reliable means to conduct experiments. ...read more.

Help from one or more governments is often needed. Seeing as the empirical method seems to work well for natural sciences, why is it not used for human sciences such as geography, history and psychology, the latter being the area of knowledge that I will be using to compare with natural sciences whilst investigating the uses of empirical evidence in each of these areas? As I will explain, there are a limited number of cases where it has in fact been used within the area of human sciences. We must first ask ourselves why empirical evidence is, more often than not, avoided when it comes to investigating various areas of human sciences? Firstly, as I explained earlier on, the empirical method uses reasoning and perception as ways of knowing. The human sciences are all about the ways of knowing that are much dependant on human behaviour - language and, in particular, emotion. Psychology relies entirely on emotion. Secondly, there is the issue of being able to reproduce the circumstances and conditions that are to be experimented. In history, it would be absurd and impossible to recreate early twentieth century Europe to investigate the causes of the First World War. This is simply not feasible. ...read more.

This raises the question as to whether these experiments really need to be carried out or whether they should even be allowed to be carried out, yet again, relating back to the ethical issues. This experiment also asks the question whether Dr Watson allowed his emotions to take over his reasoning to form this conclusion. History and geography are examples where a certain amount of empirical evidence is used because, despite the fact that the scientific method is not used, they use a lot of so-called facts and evidence. And then, using this, historians put forwards opinions and arguments using the facts and evidence they have collected as back-up. This is an example where perception and language are used as reasoning to back up an idea that has come from emotion and hence using all the areas of knowing. To conclude, it is possible to use the empirical evidence in some cases in both the natural and human sciences. Having said that, the empirical method is much more widely used in the natural sciences because it uses perception and reasoning as ways of knowing and these are futile in the realms of human sciences such as psychology. The human sciences can also use a certain amount of empirical evidence but is hard to use the empirical method when emotions and language play a big part. ...read more.