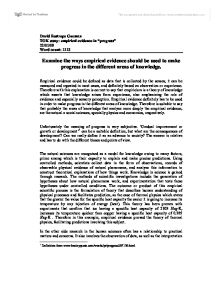 Examine the ways empirical evidence should be used to make progress in the different areas of knowledge.

David Restrepo Guzman TOK essay: empirical evidence in "progress" 22/01/09 Word count: 1113 Examine the ways empirical evidence should be used to make progress in the different areas of knowledge. Empirical evidence could be defined as data that is collected by the senses; it can be measured and repeated in most cases, and definitely based on observation or experience. Therefore with this explanation is correct to say that empiricism is a theory of knowledge which asserts that knowledge arises from experience, also emphasizing the role of evidence and especially sensory perception. Empirical evidence definitely has to be used in order to make progress in the different areas of knowledge. Therefore is suitable to say that probably the areas of knowledge that analyze more deeply the empirical evidence, are the natural a social sciences, specially physics and economics, respectively. Unfortunately the meaning of progress is very subjective. 'Gradual improvement or growth or development'1 can be a suitable definition, but what are the consequences of development? Can we really define it as an advance to society? The answer is relative and has to do with the different biases and points of view. ...read more.

In nuclear physics, by several years of investigations and collection of data, scientist have concluded that is very useful for developed cities as it helps to save the limited supplies of coal and oil, as well as it produces more energy with less quantity of raw material. Mainly because one ton of uranium produces more power than several million tons of coal and petrol, also nuclear energy reduces the environmental pollution. Therefore is correct to say that it is a progress, mostly in the way of ecological issues, but it also involves a great hazard, as the nations of the world have enough nuclear bombs to kill every person in Earth, without taking into account how unstable this kind of energy is. In the other hand economists use empirical evidence in a more subjective way, as human behavior is relatively unpredictable, as each individual in a society may react differently towards a circumstance. Based on observations and experimentations the social sciences look for a calculation on how society will react towards something, but clearly mixing subjectivity with objectivity. Because of experience some people may know how others will react in case of a crisis. ...read more.

In the other hand the better way to examine empirical evidence in economics will be for an improved allocation of resources in order to have a more equilibrated income distribution. This can be done by analyzing information as the assumptions for inflation and unemployment, and conjectures about possible solutions that are taken by past experiences on the country's economy. By examining deeply this kind of information, crisis like the one the world is experiencing nowadays can be prevented, thus avoiding all the social and economic cost it implies. In conclusion is suitable to present the idea that progress is a very subjective word, where depending on the situation, biases and points of view can really change its meaning of improvement or development. Is also palpable that with new researches based on empirical evidence, society will continue to observe an advance in some areas, let's name them technology, medicine, comfort or improvement of quality of life. However as I stated before morality, capability, equilibrium and religion will definitely be affected. A mid point involving the advantages and disadvantages of progress will also be subjective, as it depends on the perspective and circumstances of each individual. As everything in life some people will be negatively affected while others will take advantage of it. ...read more.