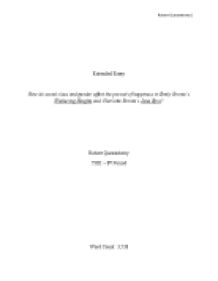 Extended Essay. How do social class and gender affect the pursuit of happiness in Emily Brontes Wuthering Heights and Charlotte Brontes Jane Eyre?

Everyone knew that Heathcliff and Catherine were close and had a special bond. But as time goes on, and Catherine meets Edgar, things change. When Catherine and Heathcliff start to drift apart, we see Heathcliff become cold and distant from people. Heathcliff?s distant from Catherine ruined him. He eventually becomes the owner of Wuthering Heights but he?s still not happy because he lost Catherine. The attitude developed by Catherine and Heathcliff show the power love has over an individual. The boundaries between people can cause them to develop personality differences. The effect social class has on the pursuit of love is highlighted in Catherine and Heathcliff?s situation. Watching Heathcliff change over the course of the story is very revealing. Heathcliff in his natural habitat is running around joyfully with Catherine and the effects of losing her devastate him. His development shows how losing love can almost destroy a person. Catherine married Edgar, who was another wealthy individual, and changed her attitude because she knew that?s what was expected of her. Heathcliff pays the price for Catherine giving into society. Heathcliff becomes resentful towards those who arranged Catherine?s marriage to Edgar. He says, ?I'm trying to settle how I shall pay Hindley back. I don't care how long I wait, if I can only do it at last. I hope he will not die before I do!? (E. Bronte, P.69) The concept of giving into societies pressures is an inhibitor of happiness. The idea of women being forced into arrangements was common in this time period. Women were not given the opportunity to strive and become their own person as often as men did. Wuthering Heights uses Catherine to show how the desire to have one thing, or one person, may be overruled by the desires society places on you. Jane?s personality is also shaped by her surroundings. She is at a constant struggle to find herself and keep up her pride. ...read more.

Bronte chooses to make Jane so weary in her honesty because she?s been suppressed all her life. Living at an unloving home and then attending a school that continued to limit her, she is not used to this attention. The relationships between characters are affected because the role they place in society changes the way people see them. Nelly and Jane are both potentially biased in their stories because the role others played in their lives. Conclusion Set in a time and area where the wealthy controlled pretty much everything, the pursuit of love and happiness are often clouded by society?s pressures. It was unheard her of for a wealthy man to fall in love with a servant or for a well-known woman to get married to an orphan. Wuthering Heights and Jane Eyre both highlight these problems. Jane, Catherine, and Heathcliff are stopped from being who they want be and who they want to be with because they have a certain reputation. There isn?t much that can be changed about where they stay in society so the characters try to get around it. Heathcliff?s destruction comes from his broken relationship with Catherine and Jane?s pride comes from her past. They both knew where it was they grew up, they knew they didn?t seem to have a chance to be more, and it ultimately lead them on to different paths. Jane tried to show society that she couldn?t be pushed around, and Heathcliff should that he could move up on the social ladder but he was still destroyed by his failed love. Gender and social class were, and possibly still are, issues when trying to find what truly makes you happy. The authors were trying to show the changes that are happening, or what they wanted to happen, to the standards society has set. Through the use of a woman who puts self-identity before love and the conflict between classes, the Bronte sisters are trying to say the societal standards and gender issues are not a justified reason for prohibiting happiness. ...read more.