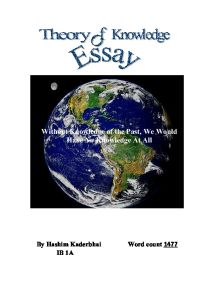 Without Knowledge of the Past, We Would Have No Knowledge At All

works, Mendel, Gregor Johann, the founder of the science of genetics (he discovered the principle of inheritance of characteristics through the combination of genes) he's successor Bateson William proved the works of Mendel and today genetics is part of the human backbone. These examples show how knowledge evolved the way humans did and so showing without knowledge of the past we would have no knowledge at all. Looking at the natural sciences the examples above which are also parts of history show that knowledge evolved and was polished over time. Here technology has made it possible for further and newer research to be carried out. Most of which have the same roots as the past. Like the examples above biochemical research is now more profound, much more challenging and advanced. Production of weapons of hybrid diseases are underway much of what researchers imagined or had theories of in the past. Nuclear energy has now been implemented due to technology researchers in the past. In the Arts I also think that without knowledge of the past there would be no knowledge at all for example: - Terrorism, an art profound in the world of today. I admire it in the sense that the true culprit is never caught and that done in the past inspires and teaches the newly recruited a better way to do the job. ...read more.

The world the world trade centre implemented of the vibrational technology. Fifthly why did the towers collapse vertically instead of horizontally? This was the most mind boiling question I came across. I have watched great buildings being demolished and looking at the video of the world trade centres collapsed and the buildings being demolished I found somewhat familiarity in the ways the buildings collapsed, raising another question in my mind, can actually two planes have the potential to bring such two great towers down? Looking at the above facts I don't see any reason why the Kenya commercial bank should survive a bomblast so powerful that its shockwaves were felt kilometres away, and the world trade centre should be reduced to dirt. I myself think that because most people did not have an idea of the political status the perceived the situation wrongly as a terrorist attack. If the people knew then maybe it would be a different story Looking at all these facts I think in some cases we can agree that without knowledge of the past there would be no knowledge at all and disagree to it in other cases. > Microsoft Encarta 2004 (CD-ROM) > The American Heritage Talking Dictionary (CD-ROM) > The TOK guide 1 Definitions of knowledge from the American heritage talking dictionary(CD-Rom) 2 Microsoft Encarta 2004.All rights reserved 3 Chemical weapons, Microsoft Encarta 2004. All rights reserved ?? ?? ?? ?? ...read more.