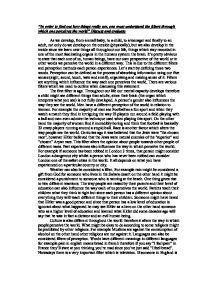 "In order to find out how things really are, one must understand the filters through which one perceives the world" Discuss and evaluate As we develop, from a small baby, to a child, to a teenager and finally to an adult, not only do we develop on the outside (physically), but we also develop in the inside since we learn new things all throughout our life, things which stay recorded in one of the most fascinating organs in the humans system: the brain. It's pretty obvious to state that each one of us, human beings, have our own perspective of the world or in other words we perceive the world in a different way. This is due to the different filters and perception methods each person experiences. Let's start by defining these two words. Perception can be defined as the process of absorbing information using our five senses (sight, sound, touch, taste and smell), organizing and making sense of it. ...read more.

Centuries ago it was believed that the Jews were "the chosen race", however Hitler believed that the Jews were natural enemies of the "superior" and "chosen" Aryan race. This filter alters the opinion about people towards other people of different races. Past experiences also influences the way in which perceive the world. For example if someone has been robbed in London 3 times, that person might consider London a dangerous city whilst a person who has never been robbed can consider London one of the safest cities in the world. It all depends on what you have experienced on a particular country or city. Weather can also be considered a filter. For example rain might be considered a gift from God for someone who lives in the Sahara desert on the other hand it might be considered a punishment to someone who is tanning at the beach. One thing gives rise to two different reactions. ...read more.

Nowadays there is a very important filter which is television. If someone in England is watching the news and sees a lot of violence in a particular country, that person may think that the country is violent on the otherhand the inhabitants of the same country might think the opposite since the television is just portraying a small, in this case bad image of the country. In a certain way it's right to state that the television news affect the way you perceive the world. I totally agree with the statement above since in my opinion I think that filters influence the way each of us perceives the world and the different filters is what makes each of one us have different thoughts and ideas. If everyone's filters were the same, everyone would have the same opinion about a particular subject, which would be boring since we wouldn't be able to have discussions in T.O.K lessons! ...read more.