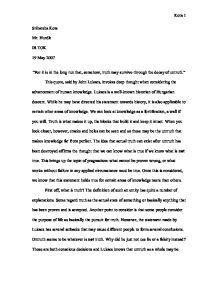 For it is in the long run that, somehow, Truth may Survive-through the Decay of Untruth

Sriharsha Kota Mr. Hurdle IB TOK 19 May 2007 "For it is in the long run that, somehow, truth may survive-through the decay of untruth." This quote, said by John Lukacs, invokes deep thought when considering the advancement of human knowledge. Lukacs is a well-known historian of Hungarian descent. While he may have directed his statement towards history, it is also applicable to certain other areas of knowledge. We can look at knowledge as a fortification, a wall if you will. Truth is what makes it up, the blocks that build it and keep it intact. When you look closer, however, cracks and holes can be seen and so these may be the untruth that makes knowledge far from perfect. The idea that actual truth can exist after untruth has been destroyed affirms the thought that we can know what is true if we know what is not true. This brings up the topic of pragmatism: what cannot be proven wrong, or what works without failure in any applied circumstance must be true. Once this is considered, we know that this statement holds true for certain areas of knowledge more than others. First off, what is truth? ...read more.

The original theory must be changed or even thrown out when new data is found, thus weeding out all untruth and preserving the truth. In my life, I have experienced how scientific principles change over time. When I was young, Pluto was regarded as a planet. Now, it is considered just an asteroid. Is this the truth? Or do we think it is the truth? In mathematics, the theories and laws that it presents are rarely challenged. Everything is what it is in mathematics and thus it is generally not doubted. This is why it is an integral part of the sciences. It holds true in many situations, ranging from astronomy and quantum mechanics to physics and chemistry. Some calculations that can be made using mathematics include finding out how fast our universe is expanding, computation of the electrical potential of a human heart, and measuring the decay of a radioactive element. It is obvious that much truth and knowledge is found within mathematics and no matter how long the "long run" lasts, humans will find mathematics to be a source of truth. In my own experience, I have noticed that knowledge of mathematics builds off of itself. ...read more.

Although it does seem that the ethics of a society change rapidly over time, several principles are the same within many cultures around the world. These principles generally tell an individual not to murder, rape, or steal. Perhaps modern ethics does represent actual progress, since more educated people are able to voice their opinions. However, does this necessarily imply that it is better for the human race, or do people now have the power to think for themselves and do what they want? Essentially, you cannot replace untruth with truth if you do not know what the meaning of truth is in the first place. The reason that I did not discuss the arts is that there is just no standard to compare them. How do you define truth and untruth in the arts? I am pretty sure that Michelangelo is different from van Gogh who are both different from DaVinci. Which artist has more truth in his work? How do we know? Under what standard can we determine that? These same questions apply to music, architecture, and literature. We all gain experience and insight from our daily experiences, but truth can be very elusive. Each area of knowledge requires its own interpretation and explanation of Lukacs' statement. We can say that it is basic human nature to build, destroy, and remake what we know as knowledge. ?? ?? ?? ?? Kota 1 ...read more.