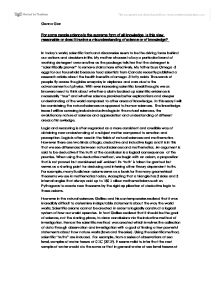 For some people science is the supreme form of all knowledge. Is this view reasonable or does it involve a misunderstanding of science or of knowledge? In today's world, scientific facts and discoveries seem to be the driving force behind our actions and decisions in life. My mother chooses to buy a particular brand of washing detergent over another as the package tells her that the detergent is "scientifically proven" to remove stains more effectively. My father buys Omega-3 eggs for our household because food scientists from Canada recently published a research article about the health benefits of omega-3 fatty acids. Thousands of people fly across the globe everyday in airplanes and cars due to the advancements of physics. With ever increasing scientific breakthroughs we as knowers need to think about whether a claim backed up scientific evidence is necessarily "true" and whether science provides better explanations and deeper understanding of the world compared to other areas of knowledge. In this essay I will be considering the natural sciences as opposed to human sciences. The knowledge issues I will be covering include inductive logic in the natural sciences, the evolutionary nature of science and appreciation and understanding of different areas of knowledge. Logic and reasoning is often regarded as a more consistent and credible way of obtaining new understanding of a subject matter compared to emotion and perception. ...read more.

No matter how many observations are made on the freezing temperature of water at sea level, the next sample of water that freezes merely adds to the series of observations. It is not certain, regardless of the number of observations that water always freezes at 0�C at sea level. To be absolutely certain, it must be known that the law of nature is immutable. These observations do not establish the validity of inductive reasoning, except inductively. In other words observations that inductive reasoning has worked in the past do not ensure that it will always work. As a knower, this problem leads me to question the understandings I obtain through science. If scientific theories are discovered inductively then surely science cannot "prove" an idea, but can only disprove ideas through new discoveries. Science operates on the assumption that a particular scientific understanding is "true" until proven otherwise. The basis of the scientific method is that if an idea conflicts with what happens in nature then the idea must be changed or built upon. Therefore, though scientific advancements have greatly benefited mankind for many centuries I do not agree with the belief of some people's that the understanding provided by the natural sciences is superior to the other forms of "knowledge" we can obtain from the various other areas of knowledge. ...read more.

However 400 years later pop and R&B music are more favored among today's generation. The introduction of this new age music does not in any way falsify baroque music, or prove it to be "invalid" in the understanding of music as an art form. There is a greater room for opinions and two clashing ideas can exist simultaneously and appeal to different people. This is not the case in the natural sciences, so should the "knowledge" we obtain through the natural sciences be placed of greater importance? I think that the most valuable form of understanding is one that is subjected to my own personal inner beliefs and values. Subjective ideas that could not be falsified, such as the understanding of the love my family has for me, my favorite food, music I enjoy and people whose company I value. Such ideas are unique to my own ways of knowing, my own perceptions and emotions. In conclusion I think the view that science is the superlative form of understanding involves both a misunderstanding of science as a source of "fact" and "truth" and a misunderstanding of personal conviction when it comes to the different areas of knowledge. However we cannot overlook the importance of science in the world today though we should think about to what extend does science provide assurance to what we think we understand about our world today. ?? ?? ?? ?? Genna Gan ...read more.