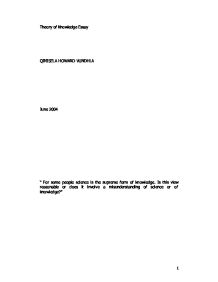 &quot; For some people science is the supreme form of knowledge. Is this view reasonable or does it involve a misunderstanding of science or of knowledge?&quot;

Some of these include religion and art, which I will explain in details later on. Personally science is one of the great modern forms of knowledge. I believe so because of the progress science has led to and this rate of progress is also striking when compared to other areas of human endeavour. We need not to deny that there can be and has been progress in fields such as literary criticism, philosophy, history and sociology even though some of these areas are related to science. May events in the past have made people to believe science is everything and the supreme form of knowledge? These kinds of people perhaps have limited understanding of different areas of knowledge. Some people are not aware of other forms of knowledge around them. They are too ignorant. Some of the reasons why some people would believe that science is the supreme form of knowledge are because of the tremendous scientific progress achieved in the past. ...read more.

But in many areas the accuracy and precision of scientific predictions is truly astonishing. For a example astronomers can predict to the second when future solar eclipses will occur and chemists can describe with great precision the consequences of mixing a given combination of chemicals. All of this is pure science, no doubt. We also need some knowledge from other areas . These may include art, history and religion. These fields do not mostly consist of scientific concepts but they have been helping us for the past centuries. History allows us to learn from the past and not repeat mistakes. It also gives us the ability to respect beliefs, understand culture and appropriately act wherever we are. We have to leave in a society full of scientific, cultural, historical and religious needs. History is the most relevant material of an individual and a society to analyse because it allows them to benefit from previous experiences. 1 ...read more.