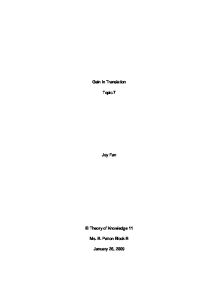 Gain In Translation Topic 7 Joy Fan IB Theory of Knowledge 11 Ms. B. Patton Block B January 28, 2009 In chemistry, charged particles are deflected from their straight-line paths when fired out of the mass spectrometer. Similarly, when presented with a certain idea or phenomenon, people often take on different approaches in tackling the subject. Such is the complexity of the perceptual and reasoning processes one utilizes that the things one see and understand are greatly affected by the people they are. Whether or not one benefits from the translation and gains subsequent knowledge could be a matter of two explanations. One attempt to explain the loss or gain in translation would be that different people, having acquired different degrees of experience and prior knowledge to the topic often have distinctly different perspectives on the question in matter. One other possible explanation would be that once different reasoning process are incorporated in the process of perception the end product would vary significantly. Although a fair amount of people believe that previous experience in a topic is crucial in aiding the formation of a hypothesis, the movie Pi proves otherwise. The protagonist Max Cohen is a man who is blessed with a gifted mind in mathematics, but is also cursed with severe chronic headaches that often make him pass out from pain. ...read more.

The particular lima�on that I was examining had a shape not uncommon in lima�ons (see appendix 1). Simple algebra enabled me to find the equation to the lima�on, and I stopped at that, thinking that one graph corresponds to one and only one equation. How terribly wrong I was. After some gentle prodding from the teacher's part, I doubtfully embarked on a second journey to find another equation for the lima�on given. This was when our class had just started to cover polar graphs, and we had scarcely any knowledge in the field, so imagine my surprise when I found that a second equation also produced a lima�on of the same shape (see appendix 2). This discovery completely abolished any notion that I had previously regarding one graph having one and only one possible equation. However, with only a portion of my previous endeavours with mathematics demolished, the rest remained intact. I quickly picked myself up again and recalled that coordinates in polar graphs were not unique, one point on the polar plane may have multiple polar coordinate pairs corresponding to the same point. In that case, since graphs are composed of countless points, would graphs be similar? Equating the two equations together gave me an answer that read -2= 2, to think that I'd initially thought the two graphs were identical, when the equation is clearly incorrect! ...read more.

"History consists of a corpus of ascertained facts. The facts are available to the historian in documents, inscriptions, and so on, like fish on the fishmonger's slab. The historian collects them, takes them home, and cooks and serves them in whatever style appeals to him. (Carr 4)" The historian's perspective plays a crucial role in writing history, and the reasoning portion, the "interpretation plays a necessary part in establishing the facts of history. (Carr 27)" By using perception and reasoning, one is able embrace their inner knowing to add personal value to the topic given. Therefore, the interpretation of the topic is not so much a loss in translation as a gain in translation. Consequently, the knowledge conveyed in the image presented is not conserved throughout, as in the conservation of energy in physics. Most of the time, the end product of perception and reasoning is of much higher value than the raw image itself. One might argue that what is presented is the entirety of what is required of one to know, but as the old proverb goes, "there are one thousand Hamlets through one thousand person's eyes". Assuming that these viewers are all critical thinkers, perspective beings, and reasonable people, each, with their own eyes, shall see a different Hamlet. Word Count: 1365. ...read more.