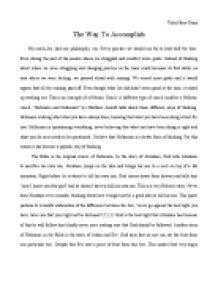 ﻿Toby Marx-Dunn The Way To Accomplish My coach,Joe, had one philosophy, run. Every practice we would run for at least half the time. Even during the part of the season where we struggled and couldn?t score goals. Instead of thinking about where we were struggling and changing practice so the team could increase its foot skills, an area where we were lacking, we pressed ahead with running. We scored more goals and it would appear that all the running paid off. Even though what Joe did didn?t seem good at the time, it ended up working out. This is an example of a Hebraic Coach. A different type of coach could be a Hellenic coach. ?Hebraism and Hellenism? by Matthew Arnold talks about these different ways of thinking. Hebraism is doing what what you have always done, knowing that what you have been doing is best for you. Hellenism is questioning everything, never believing that what you have been doing is right and what you do next needs to be questioned. I believe that Hellenism is a better form of thinking. For this reason it has become a popular way of thinking. ...read more.

He questioned everything that happened, he accepted no truths. When the Greeks went to war with the Trojans, Socrates was not supportive. He was outspoken in his distaste with the war. The reason he was brought to trial was because he wouldn?t support the war. When there are wars in the olden times it was very important to have a united home front of support. These actions by Socrates show Hellenism. ?Take care your light be not darkness?(5,1,1) is a great quote to describe Socrates. It means that you should never take for-granted that what you are doing is the right thing; that is what Socrates was doing when talking about the war. Another story from the Greeks that describes Hellenism is the story Achilles. He was the greatest warrior in the world but he sat out one of the biggest battles ever. When his king, Agamemnon stole his slave girls Achilles knew that this was an injustice. With Hellenism one should always ?see things the way they are?. Achilles did this and knew he had to fight for his own justice. Hebraism is still alive and well today. It has a way of coming out in people in times of fear or when they need something. ...read more.

People really had to see through years of cloudiness to see the true light that was the fact that corporations can do more bad than good for this country. It would have been easy for people to sit back and just think that nothing was wrong. The scale of the movement is what makes it show the true moment while some things like gay marriage for the Hebraic way are fading while the Occupy movement is new and strong. The better and becoming more popular way of thinking in the country in Hellenism. We are coming off a time in this country where we were very Hebraic. The attacks of 9/11 created a time when being Hebraic was good. We needed a strong leader to organize and keep people calm. As these attacks fade into the background the country has turned to social change. We elected an African American President something that was never thought possible. The Occupy Wall Street movement was a time when people where trying to change there light they realized that big business was in fact hurting this country not helping and wanted to make a difference. We are not yet perfect but the path is being laid for a bright future ...read more.