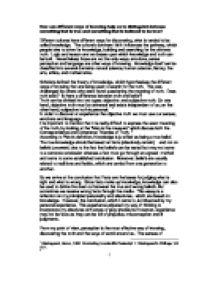 How can different ways of knowing help us to distinguish between something that is true and something that is believed to be true? Different cultures have different ways for discovering, what is tended to be called knowledge. The culture's dominant faith influences the pathway, which people take to strive for knowledge, building and searching for the ultimate truth. Logic and reason are two bases upon which knowledge and truth can be built. Nevertheless those are not the only ways; emotions, sense perception and language are other ways of knowing. Knowledge itself can be classified into several domains: natural science, human science, history, the arts, ethics, and mathematics. Scholars defined the theory of knowledge, which hypothesises the different ways of knowing that are being used to search for the truth. This was challenged by others who were found questioning the meaning of truth. Does truth exist? Is there a difference between truth and belief? Truth can be divided into two types: objective and subjective truth. On one hand, objective truth must be universal and exists independent of us; on the other hand, subjective truth is personal. ...read more.

"it Is very like a spear!", the third man approached the elephant and took the squirming trunk within his hands, then he said "It is very like a snake!", the fourth man reached out an eager hand, and felt about the knee. "This is clear enough the Elephant is very like a tree!" The Fifth, who chanced to touch the ear, and then he said "it is very like a fan!" The Sixth got the swinging tail and said "Is very like a rope". At end, the moral form this story is that each of these men saw part of their truth. The second way of knowing is emotion. Emotion is a word, which is higher than being described into words. It is not materialistic, but closely related to the feeling. Several people trust their emotions to guide them on searching for the truth. Emotions are countercurrent with logic and can lead to hasty generalizations. This was exemplified when I encountered a fight between two children. As I tried to understand the problem as having one way to solve it, each one of them gave me different story. Each took from his emotion a way to justify his opinion, without referring to a logical reason. ...read more.

In conclusion the key for distinguishing between what is believed to be true and truth is by using these ways of knowing. Although some of these ways of knowing are different from person to person, the use of all of them will lead to what is most likely true? Moreover, this issue is similar to that issue between science and religion. Which is right and which is wrong; take an example, recently a movie was made called "End of The World", which basically talks about specific day "21st December 2012", which the world will end according to the Mayan calendar. Which makes a lot of discussions neither to believe this movie or not due to the fact that in many religions such as Islamic religion the time for the end of the world is something unknown. Talking from my own and Muslim's perspective, I believe in God and I believe that there will be an end of the world, and I am not against the 2012 idea because I have no way of knowing for sure. At the end, I can say that there is no such thing as true, it is true because we believe it is. Word Count: 1504 1 Kierkegaard, Soren, 1992. Concluding Unscientific Postscript 1 : Kierkegaard's Writings, Vol 12.1. 2 ?? ?? ?? ?? 1 ...read more.