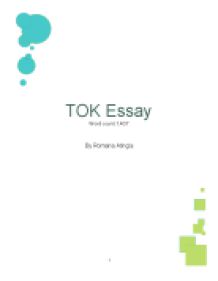 Princes were privileged To kill and numbers sanctified the crime. Ah! Why will kings forget that they are men, and men that they are brethren?? From this quote we can see that ethics are different for everybody and what we see as truth will be affected by our emotion. For example if I you saw one of your siblings commit a crime, and you are asked to testify against them will your emotion hinder you from seeing what is the truth? Another example a mother is in court because her child has been accused of murder and her child has been proven guilty, will her motherly love prevent her from seeing the truth as she will argue that she knows her child best? On the other hand emotions as seen from the above example can be so strong that they hinder us from seeing what the truth is and eventually from distinguishing what the difference is between the truth and the believed truth. Emotion can also hinder our ability to reason. Language is the key to knowledge it?s a way that we can communicate our ideas and thoughts. Therefore how can language help us understand the knowledge we have thus helping determine if it is true? Language is a medium which we use to deliver the belief or truth. Language is also used when convincing an individual of a reason that has been stated or when sharing a perspective, these reasons or perceptive maybe true or believed to be true. ...read more.

However as human beings we tend to have limitations to how far our sense can be used and this limitations lead to people having different perceptions on things. This idea tie in with Federico Fellin?s quotes that a ?different language is a different vision of life?, will see that different cultures have different views on the same thing. Despite their limitations the four ways of knowing all provided evidence for us to get closer to knowing the real truth thus distinguishing the truth from the believed truth. In the world there is no set ?truth? only truth that we believe to be true, even theories which may believed to be the universal truth may be provided wrong. Sometimes we fined that there is no difference between the truth and what is believed to be true and therefore seeing that the ?believed truth? may actually be the true. With the different ways of knowing we use them to identify the truth by examining what we have. Universal we may find that they are some unresolved question such as the old age question that who created the world and how was it created? But the question to be asked is who decided which of the theories and evidence that have already been provided are wrong when we as human beings don?t have the power to ?know? that much. ...read more.