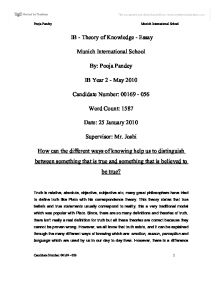 IB - Theory of Knowledge - Essay Munich International School By: Pooja Pandey IB Year 2 - May 2010 Candidate Number: 00169 - 056 Word Count: 1587 Date: 25 January 2010 Supervisor: Mr. Joshi How can the different ways of knowing help us to distinguish between something that is true and something that is believed to be true? Truth is relative, absolute, objective, subjective etc, many great philosophers have tried to define truth like Plato with his correspondence theory. This theory states that true beliefs and true statements usually correspond to reality, this a very traditional model which was popular with Plato. Since, there are so many definitions and theories of truth, there isn't really a real definition for truth but all these theories are correct because they cannot be proven wrong. However, we all know that truth exists, and it can be explained through the many different ways of knowing which are: emotion, reason, perception and language which are used by us in our day to day lives. However, there is a difference between believing something is true like religion which changes from person to person and it being true in real life such as facts like math; I have divided truth into two main parts: subjective and objective. ...read more.

I am angry at everyone who passes by even if I don�t know them. But, once I have had something to eat suddenly everyone is alright, I am not angry at the waiter anymore or the cook. This is because at that time and situation, it was emotionally true which a type of subjective truth and changes with time. This is an example of when believing something is true doesn�t always make it true. There are several emotions that can be used throughout such as happiness, for me, "paneer" an Indian dish makes me happy because it is not that commonly found in Germany. But maybe for another person who dislikes Paneer might not feel the same way I do when I order Paneer, they might feel quite the opposite. This shows that emotions are not a very reliable way of knowing as they change for every person and what I might feel might not be the same for the next person. These are usually very varied among people and change consistently which makes it unreliable, also it deals with personal and private experience of oneself which makes it hard to communicate this knowledge. Reason mainly uses of logic and deduction to confirm the truth. Induction is moving from a set of specific facts to a general conclusion, these facts could be from your history or perception, only a very small percentage of reasoning is done using induction. ...read more.

The term "personally opposed" could be interpreted in several ways, it could mean that the act is wrong otherwise why else would they oppose it however the terminology used in that is statement is not based on personal convictions like " i dislike". By the language used, we can see how double speak may twist our version of what we think is right or true. Language can be complex because it changes on the context of how it is used. Anna Brownwell Jameson, a British writer said, 6" Accuracy of language is one of the bulwarks of truth" This quote shows that language is open to our perception which is why perception and language are used together. No matter how accurate language you use, it will still be interpreted in different ways by different people which can change the way truth is known. It seems as though truth could be said as an accumulation of all the ways of knowing because using only 1 or 2 would give a biased view of the truth which is why these different ways of knowing help in differentiating between the objective truth and subjective or what is believed to be true and what is actually true. The prime examples are in religion and science, as religion is believed to be true by people while science is a worldwide truth like facts. Overall, the ways of knowing if used together will help us know the difference between truths. ...read more.