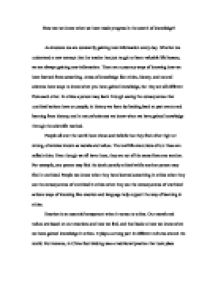 How can we know when we have made progress in the search of knowledge?

How can we know when we have made progress in the search of knowledge? As knowers we are constantly gaining new information every day. Whether we understand a new concept that the teacher has just taught or learn valuable life lessons, we are always gaining new information. There are numerous ways of knowing how we have learned from something. Areas of knowledge like ethics, history, and natural sciences have ways to know when you have gained knowledge, but they are all different from each other. In ethics a person may learn through seeing the consequences that unethical actions have on people; in history we learn by looking back at past events and learning from history; and in natural sciences we know when we have gained knowledge through the scientific method. People all over the world have views and beliefs that they find either right or wrong, otherwise known as morals and values. The real life executions of our these are called ethics. Even though we all have them, they are not all the same from one another. For example, one person may find the death penalty ethical while another person may find it unethical. People can know when they have learned something in ethics when they see the consequences of unethical in ethics when they see the consequences of unethical actions ways of knowing like emotion and language help support the way of learning in ethics. ...read more.

When we educate ourselves and learn from past events that have taken place, we are able to prevent the events that were unfortunate from happening again. For example, the holocaust was an event in which Hitler and the Nazi party killed millions of innocent people, mainly Jewish people, just because they were apart of the Aryan race. Teachers teach us about the holocaust and other genocides today so that they do not happen again in our society. When we look at how we gain knowledge in history, emotion and language help explain why people make the actions that they do and, it helps pass down history from generation to generation. Just like in ethics, emotion in history is extremely important. Emotion is the feeling behind what people do and looking at it in history can help clear up any confusion as to why someone did what he did. If you look at Martin Luther King Jr. and his contribution to the Civil Rights movement, you can tell that he felt passionately about the rights and equality of all people. His feelings and emotions led him to put him and his families' lives in jeopardy so he could peacefully fight for the equality of every one. King's dedication and willingness to fight for what is right is a perfect example of how emotion takes part in history, and how it drives people to take actions that can change society for generations and generations to come. ...read more.

Observing something could be any of the five senses; For example, the claim that the earth is flat. Someone made the observation that the world was not on a slope so they assumed that it was flat. Although people of that time made those observations, their claim was not true because reason proved otherwise. Reason in natural science can either prove a claim to be true or false. People used reason to conclude that the earth was not in fact flat, but a sphere because people that traveled the world could not find the edge of the earth. This shows how reason can either prove an observation right or prove an observation wrong. As I did my research, I found that areas of knowing like ethics and history have a lot in common whereas other areas of knowledge such as natural sciences have nothing In common with each other because people in history used their morals and values to make the decisions and that fueled their actions. Although ethics and history have a lot in common, all three areas of knowing have different ways of knowing when we have gained knowledge. In ethics we know when we have gained knowledge when we can see the consequences that unethical actions have on people. In history, we know by looking back at past events and learning from society's mistakes; and for natural sciences, we know when we have gained knowledge through the scientific method. ...read more.