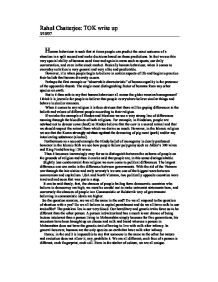 How different cultures are unique

Rahul Chatterjee: TOK write up 5/10/07 Human behaviour is such that at times people can predict the exact outcome of a situation in a split second and make decisions based on those predictions. In fact we see this very special ability of humans used time and again in areas such as sports, our daily conversation, and even in the stock market. Basically human behaviour, when it comes to everyday activities is very general and very alike and predictable. However, it is when people begin to believe in certain aspects of life and begin to practice their beliefs that human diversity occurs. Perhaps the first example or "observable characteristic" of human equality is the presence of the opposable thumb. ...read more.

However, in the Islamic religion we see that the Koran strongly advises against the devouring of pig meat (pork) and/or any intoxicating substance (alcohol). Furthermore as a second example the Hindu belief of monogamy is clearly professed however in the Islamic faith we see how people follow polygamy such as Akbar's 300 wives and King Faahd having 120 wives. Thus it becomes increasingly easy for us to distinguish between the cultures of people on the grounds of religion and thus it can be said that people are, in this sense distinguishable. Slightly less controversial than religion we now come to political differences. The largest difference one can make is the difference between governments. ...read more.

The problem lies in our very blood. Our hereditary and genetic traits force us to be different than the other person. A person in Switzerland has a much lower chance of being lactose intolerant than a person living in Maharashtra simply because for five generations, his ancestors have been brought up on cheese and milk and bread whereas a person in Maharashtra does not have the genetic trait of having to live with milk after infancy. In general however, humans are the only species on earth that have milk after infancy. Hence, in the end it is impossible to say that someone is the same as the other for nature and evolution does not allow it, nay, prohibits it. We are all different; each face of a person is different, each fingerprint, each cell. Even in the shelter of culture, we are all unique. ...read more.