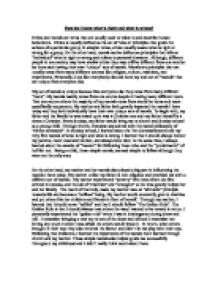 How do I know what is right and what is wrong?

How do I know what is right and what is wrong? Ethics and morals are terms that are usually used to relate to and describe human behaviours. Ethics is usually defined as the set of rules or principles that guide the actions of a particular group. In simpler terms, ethics usually means what is right or wrong for a group. On the other hand, morals can be defines as principles that tells an "individual" what is right or wrong and relates to personal character. Although, different people in one society may have similar ethics they may still be different from one another by them each having their own "unique" sets of morals. Morals are principles that can usually come from many different sources like religion, culture, traditions, and experiences. Personally, I am like everybody else and have my own set of "morals" that are unique from everyone else. My set of morals is unique because like everyone else they come from many different "roots". My morals mainly come from one source despite it having many different roots. ...read more.

The Golden Rule is that I should always treat others the way I wanted to be treated in return. I personally experienced the "golden rule" when I was in kindergarten during show and tell. I remember bringing a new toy to one of the show and tell and I remember not letting any touch it since I was afraid the others would break it. In return, when others brought in their toys they also returned the favour and didn't let me play with their toys. Following that incidence, I learned the importance of the morals that I learned through church and my mother. Those simple morals also helped guide me successfully throughout my childhood and I didn't really think much about them. The sets of morals I have today took a significant turn and became much more complex when I was in grade 8. The change in my morals I would say was in a sense indirectly related to "education". The change in my morals came in grade 8 when I had to do a class debates in social studies on two types of Chinese philosophy "Confucianism and Legalism". ...read more.

just for the sense of "self benefit". More notoriously, there is also the incident about the captain Schettino abandoning the ship before all the passengers were off and make an excuse all about it just for his own benefit Although, I am convinced by rational egoism and my morals today are influenced by it in certain ways. I must admit that I still retain the other morals I learned before hand like my "altruistic" morals. An example of this would be times when I see ads on TV asking for donations or walking the streets of downtown and seeing the homeless on the streets. During those times, I would be driven by emotions and just try to "help" without thinking would those actions benefit me or not. All in all, I am a person whose repertoire of morals is not concrete and those morals can be added upon and tweaked which can be good and bad. Whether it is, believing in religion again or adopting a new culture further down my life journey. My morals being open to change would allow me to adapt to any of those changes in life and make me a better person. ...read more.