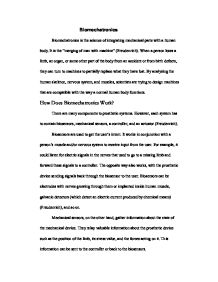 How Does Biomechatronics Work?

Biomechatronics Biomechatronics is the science of integrating mechanical parts with a human body. It is the "merging of man with machine" (Freudenrich). When a person loses a limb, an organ, or some other part of the body from an accident or from birth defects, they can turn to machines to partially replace what they have lost. By analyzing the human skeleton, nervous system, and muscles, scientists are trying to design machines that are compatible with the way a normal human body functions. How Does Biomechatronics Work? There are many components to prosthetic systems. However, each system has to contain biosensors, mechanical sensors, a controller, and an actuator (Freudenrich). Biosensors are used to get the user's intent. It works in conjunction with a person's muscle and/or nervous system to receive input from the user. For example, it could listen for electric signals in the nerves that used to go to a missing limb and forward these signals to a controller. ...read more.

Universities such as Massachusetts Institute of Technology, the University of Twente in the Netherlands, and the University of California all have special laboratories where they conduct the latest research into biomechatronics. Below are some of the current areas of study. Analyzing Human Motions In order to design machines that function like human body parts, we must first analyze how humans move. Dr. Peter Veltink and his colleagues at the University of Twente are analyzing how humans walk by measuring body movements with a camera system, ground reactive forces with force plates in the floor, and muscle activity with electromyography (University of Twente). Electromyography is the recording of the electrical activity produced by muscle contractions (Freudenrich). Scientists gather this information and use it to build computer and mathematical models. These models help them design devices that imitate human movements. Human-Machine Interface The ultimate goal of biomechatronics is to use machines to assist or supplant biological parts of the human body. ...read more.

Electrodes connected to the stimulator are attached to the leg muscles. The muscles on either side are stimulated alternatively; these actions mimic the swimming motion of a fish. This is one example of the use of living muscles as actuators. Research at the University of Waterloo There is a significant amount of research being conducted in the field of biomechatronics in graduate programs around the globe. The University of Waterloo currently offers graduate studies in Intelligent Human-Machine Systems / Optomechatronics Laboratories under Professor Jonathan Kofman (Kofman). The areas of research include biomechatronics, optomechatronics (3D computer imaging), and robotics. Students from the math faculty can participate in research at our own university. Biomechatronics is an exciting field in medical science that is quickly expanding as new technologies enable machines to mimic human body parts more realistically. Interested students and faculty should look into the many areas of research available in this field. After all, biomechatronics is about improving the lives of people who have lost parts of their bodies by allowing them to live as normal people. Hence this research has a clear positive effect on peoples' well being. ...read more.