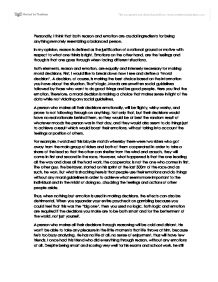 How does reason and emotion play a part in anything resembling a balanced person?

Personally, I think that both reason and emotion are crucial ingredients for being anything remotely resembling a balanced person. In my opinion, reason is defined as the justification of a rational ground or motive with respect to what one thinks is right. Emotions on the other hand, are the feelings and thoughts that one goes through when facing different situations. Both elements, reason and emotion, are equally and intensely necessary for making moral decisions. First, I would like to break down how I see and define a "moral decision". A decision, of course, is making the best choice based on the information you have about the situation. That's logic. Morals are unwritten social guidelines followed by those who want to do good things and be good people. Here you find the emotion. Therefore, a moral decision is making a choice that makes sense in light of the data while not violating any social guidelines. A person who makes all their decisions emotionally, will be flighty, wishy-washy, and prone to not following through on anything. Not only that, but their decisions would have no real rationale behind them, so they would be at best the random result of whatever moods the person was in that ...read more.

If they used an ounce of emotion in their business though, then they would stop getting ahead on other peoples' misfortune. So, we have to strike a balance there. When you throw morality into the mix, every decision is coloured by a little bit of intuition. Does the decision seem right? And I think that to make those sorts of decisions, there's a mix of reason and emotion, too. You have to be able to feel good about the decision, and at the same time, you have to be convinced that the decision was the right one. In my experience, emotion is the beginning, the end and the motive for morality. The human brain likes to rationalize its impulses and emotions to the point that, after the moral decision is made, it can categorize its moral decision as one of those clever rational stunts it normally uses to solve problems. Morality is based on what is beneficial or pleasurable to the individual, but benefit and pleasure are products and inputs of emotional states, so reason, logic and rational process is merely the means for the mind to get from one emotional state to the next. ...read more.

In the imagination, just because a cat scratches us for getting too close today has no bearing on whether the cat will scratch us tomorrow. The rational mind quickly makes up for this deficiency. It recognizes patterns much faster than the imagination will. For example, I once was questioned by my mother if I was gay just because I told her I liked the colour pink a lot. This can be seen as a form of reason, as the usual pattern is that girls were the ones who could and were supposed to like pink, not guys. And as such, this pattern is clearly portrayed single-mindedly by my mother, who portrayed these reasons onto me. The interaction of the rational and imaginative functions of the mind is in sensation. The imagination absorbs all sensation and processes it into what we can consider coherent. For instance, when I see a brownish, flat surface with 4 legs, my imagination immediately groups those experiences together into one whole. My rational brain takes that information and says "table" to me. Thus in conclusion, I am proud to state that reason is the psychological component which governs emotion, while emotion is the component that gives impetus. However alone, they both share the same severe consequences and are unable to resolve any issues thrown to them. ?? ?? ?? ?? ...read more.