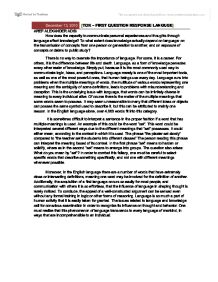 How does the capacity to communicate personal experiences and thoughts through language affect knowledge? To what extent does knowledge actually depend on language

How does the capacity to communicate personal experiences and thoughts through language affect knowledge? To what extent does knowledge actually depend on language: on the transmission of concepts from one person or generation to another, and on exposure of concepts or claims to public study? There is no way to overrate the importance of language. For some, it is a career. For others, it is the difference between life and death. Language, as a form of knowledge pervades every other realm of knowledge. Simply put, because it is the most commonly used way to communicate logic, ideas, and perceptions. Language merely is one of the most important tools, as well as one of the most powerful ones, that human beings use every day. ...read more.

It may seem unreasonable to many that different ideas or objects can posses the same symbol used to describe it, but this can be attributed to mainly one reason. In the English language alone, over 4,000 words fit into this category. It is sometimes difficult to interpret a sentence in the proper fashion if a word that has multiple meanings is used. An example of this could be the word "set". This word could be interpreted several different ways due to the different meanings that "set" possesses. It could either mean, according to the context in which it is used. The phrase "the plaster set slowly" compared to "the teacher set the students into different classes" The person reading this phrase can interpret the meaning based of its context. ...read more.

Additionally, the acquisition of a first language occurs so easily for most people, and communication with others it is so effortless, that the influence of language in shaping thought is rarely noticed. To conclude, the appeal of a well-constructed argument can be sensed even without any formal training in logic or other forms of reasoning. Language is so much a part of human activity that it is easily taken for granted. The issues related to language and knowledge call for conscious examination in order to recognize its influence on thought and behavior. One must realize that this phenomenon of language transcends to every language of mankind, in ways that are incomprehensible to an individual. ?? ?? ?? ?? December 13, 2010 [TOK - FIRST QUESTION RESPONSE LANGUGE] AREF ALEXANDER ADIBI ...read more.